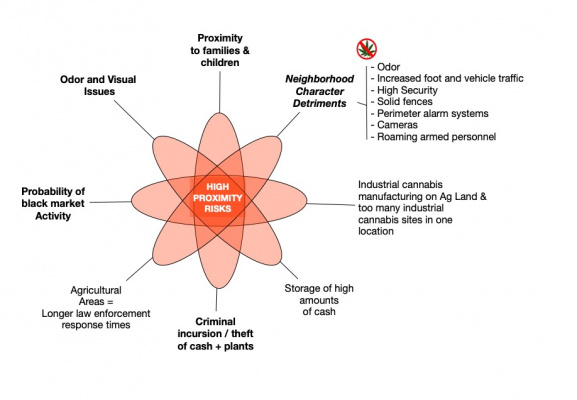 Responsible Cannabis Ordinance Amendments: A Petition to the SLO County Board of Supervisors

BackgroundOn November 27, 2017 the San Luis Obispo County Board of Supervisors approved the current Cannabis Ordinances which were developed with the active participation of the cannabis industry, and n ...Read More

On November 27, 2017 the San Luis Obispo County Board of Supervisors approved the current Cannabis Ordinances which were developed with the active participation of the cannabis industry, and not our community at large. This blatant inequity has resulted in 1) numerous appeals being filed by nearby home and business owners, 2) lawsuits being filed against the county and cannabis growers by environmental community groups, 3) county staff being inundated with odor proximity-related complaints, and 4) Public Records Act requests by county residents trying to ascertain what is driving the shrouded and broken cannabis regulation and permitting process in SLO County. Currently proposed Phase II amendments do not address the serious concerns of residents, and proposed Phase III amendments will not be addressed before the vast majority of the 141 allowed permits are issued. Without substantive change to the one-sided cannabis regulations, SLO county residents in rural communities and those living near city lines face an unmitigated incursion of industrialized cannabis production that threatens to damage their livelihoods, neighborhood character and health.

We, the undersigned, are concerned citizens who urge our leaders to fulfill the stated purpose of the cannabis ordinances to protect the public health, safety, and welfare, enact strong and effective regulatory and enforcement controls in compliance with State laws and federal enforcement guidelines, protect neighborhood character, and minimize potential for negative impacts on people, communities, and the environment by acting immediately to: (Section 23.08.420 of the Cannabis Land Use Ordinances)

2) Include residential dwelling units in the “sensitive receptor” definition and site restrictions.

3) Keep the cultivation of cannabis indoors, and limited to sealed greenhouses that do not vent to the atmosphere.

5) Implement strict density limitations for the number of cannabis cultivation sites that may be near each other.