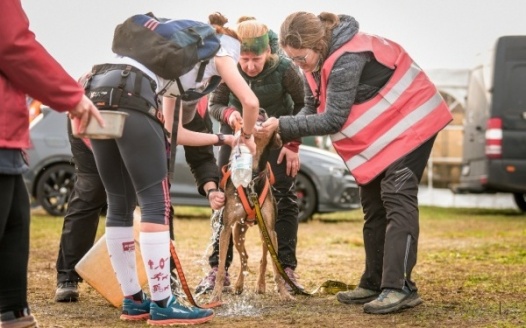 Dear Board of IFSS.

We, the athletes are concerned about overheating dogs in dryland races.

We demand two changes to the race rules.

1. When temperature rises over 13 degrees an hour before the start of a class, the tracks have to be at least 10% shorter than announced in invitation or the same length as the shortest announced track of the competition.

2. When temperature rises over 10 degrees before the first start of a class, the arranger of a race has to provide water to the start and finnish for dogs to drink and to wet the dogs. The race officials cannot deny the right of competitors to put water on the dogs' body in any part of the event.

If the track is in sunshine and temperatures above 10 degrees the organisation also has to provide a water station for dogs to be able to cool down on the trail. Preferable between 50-75% of the distance of the track. In this case participants or their dogs can decide if they need a small break on the trail.