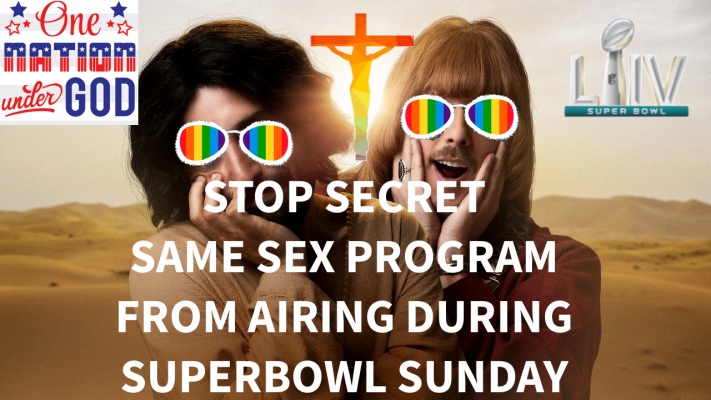 What is this about?

The liberal media is secretly plotting to air a suggestive TV program depicting TWO MALES right before the kick-off of Super Bowl LIV.

What is this short program about? What is the hidden plot?

These two men will have MAKEUP ON including male bronzing ( something common in the same sex sinning groups), one of the two will start complimenting the other on his intelligence and life accomplishments.

THIS IS A WELL KNOWN SAME SEX TACTIC TO PENETRATE A MALE's VULNERABILITIES by " fluffing" his ego & eventually gaining a straight Christian man's trust and weakening his god given will.

WHAT IS THE PLOT?

Once this part of the plot occurs, the two men will engage in dialogue suggesting the following:

- Suggestive verbal acts eluding to one male reaching with one hand or both and touching the other male's genitalia to show gratitude.

- Suggestive verbal acts eluding to one male using one hand or both to stroke the other male's genitalia to show servitude.

- The short program will end with both men displaying the emotions consistent with one man achieving excitement, swelling and eruption.

-Both males will show immense satisfaction, congratulate each other for their skills and embrace to say goodbye.

WHAT IS THE POINT OF THIS PROGRAM?

This very SHORT program is designed to generate a proliferation of mental images that are sexually suggestive and blatantly pornographic designed to become the guidelines for acceptable TEENAGE SOCIAL BEHAVIOR, INFLUENCING THEIR MIND TO NORMALIZE SAME SEX AND TO ENCOURAGE THEM TO CONSUME IT.

This is an ongoing plot by the liberal elite and liberal media to sway YOUR CHILDREN AWAY FROM OUR JUDEO CHRISTIAN VALUES and immerse them in a life of same sex sin, outrageous/offensive designer clothing, offensive music like ( I like big butts and I can not lie), the removal of some if not all male typical hair around the eyebrows and the male genitalia and the anus. This is designed to crate new customers for companies owned by the liberal elites.

Leviticus 18:22: " Thou shalt not lie with mankind, as with womankind: it is abomination."

Leviticus 20:13: "If a man also lie with mankind, as he lieth with a woman, both of them have committed an abomination: they shall surely be put to death; their blood shall be upon them."

Deuteronomy 23:17: " There shall be no whore of the daughters of Israel, nor a sodomite of the sons of Israel."

PLEASE SIGN THE PETITION TO STOP FOXNFL FROM AIRING THIS AD.

ONCE THIS AD HITS THE AIRWAVES, IT WILL PROPAGATE ON SOCIAL MEDIA AND WILL BE A CONSTANT PRESENSE CORRUPTIMNG THE MINDS OF YOUR CHILDREN, SPOUSES, FAMILY MEMBERS AND FRIENDS.

YOUR CHILDREN WILL NORMALIZE SAME SEX AND WILL EVENTUALLY WANT TO MOVE TO A SANCTUARY STATE LIKE CALIFORNIA!!!!!!!!

WE CAN WITH 100,000 SIGNATURES BY 12 NOON SUNDAY EASTERN STANDARD TIME.