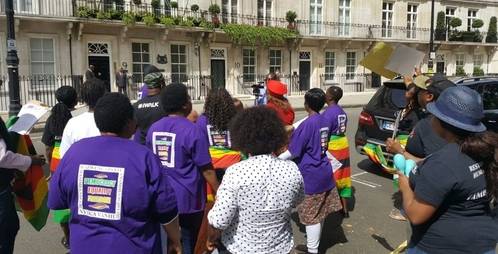 We, the undersigned people of Zimbabwe and sympathisers have a simple but serious request that we kindly ask you, Honourable Lee Hsien Loong, the Prime Minister of the Republic of Singapore, and your government to look into.

We are very concerned with the way that and extent to which the President of Zimbabwe, Robert Gabriel Mugabe, his immediate & extended families and some of the Zimbabwean government political elite are plundering our national resources and fraudulently stashing them in your country.

Your country is effectively complicit in the plundering of the said Zimbabwean resources by facilitating the laundering of same and by providing a haven for the launderers and their loot.

This is at the expense of the impoverished Zimbabwean citizens and residents, some of whom are dying prematurely and unnecessarily for want of basic necessities like food, medication and sanitation not to mention murder, torture and persecution by state machinery at the behest of Robert Gabriel Mugabe and the ruling elite.

Cognisant of the fact that money laundering is a crime, we kindly ask you to reconsider your personal role, if any, that of your government, institutions, citizens and residents, covert or overt, and to take immediate steps to record, stop, freeze and seize all proceeds of this crime with a view to handing them over to a successive and progressive democratically elected government of Zimbabwe.

Should we not get your timely cooperation, we shall organize regular peaceful demonstrations at your Embassies, High Commissions and other diplomatic missions in the world with a view to bringing this matter to the attention of the international community. We shall also be petitioning relevant regional and international bodies and institutions for support.