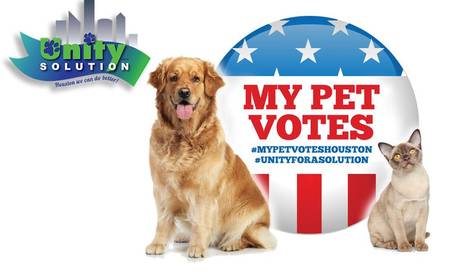 Unity for a Solution 0

1230 people have signed this petition. Add your name now!

Calling all Houston residents! Two minutes of your time can help secure a solution to Houston’s animal welfare crisis! The election for a new mayor and city council will take place on November 3, 2015. The people we elect into office will decide which issues affecting our city will receive funding and in what amount. As you may already be aware, homeless and unwanted dogs and cats wander the streets and live in parks and along the bayous, especially in low income areas. According to BARC (Houston’s animal welfare agency) there are more than 1 million homeless animals on Houston’s streets. Worsening the problem are the number of cases involving animal cruelty and neglect. Houston’s animal welfare groups regularly encounter abused or neglected animals and the Houston SPCA reports over 9,000 animal cruelty cases in 2014 alone. Not only are these animal welfare issues a concern for animal lovers, they are a public health, public safety and public relations problem for Houston and its residents. Without additional action being taken by our city government, Houston’s animal welfare crisis will continue, and in all likelihood, worsen.

How can you help? In two quick and easy ways!

The more signatures there are on the petition and photos tagged with the campaign name, the better chance we have of showing the mayoral and city council candidates that working toward a solution to our city’s animal overpopulation and cruelty crisis is important to the residents of Houston.

For more information about this issue, please see unityforasolution.org