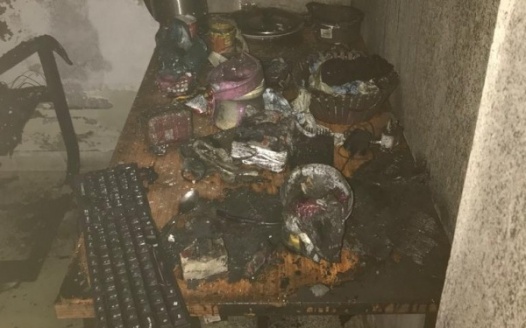 On 23rd April 2022, at night around 8:45pm fire broke out in a room in hostel no 4, the hostel where girl PG residents and interns stay. Due to a certain mishap, the bed caught fire which led the occupant to call the security guards. On trying to alert the residents about the fire, it was found that the fire alarm was not functioning. None of the security guards knew the emergency protocols, how to operate a fire extinguisher or how to evacuate the hostel in a proper & safe way. The warden on night duty was not present at that time. The residents who were trying to evacuate the hostel were clueless, added to the smoke and darkness and the EXIT sign board being non-functioning. After, the fire was put out, no higher authority, be it the supervisor, warden or chief warden, contacted the affected residents. Even, after this ordeal which had scared everyone for their life, they were asked by the warden to adjust for the night and Sunday. This wasn’t the first issue of a fire breaking out in the hostel in AIIMS Patna.

The following issues need to be brought to attention of administration:

We are highly disappointed about the fact that AIIMS Patna does not respect the needs & welfare of the PGTs. The hostel maintenance being another major issue, there is never availability of the required things in the store. PGTs have to wait for months to get the basic things in their rooms repaired else they had to repair it themselves in their hectic schedule which is a source of constant distress.

Moreover, the female PGTs don’t have a designated hostel for them. They stay along with the interns in hostel 4 and 5 where the rooms are subpar compared to the other Resident hostels. Even after repeated requests and applications, no steps have been taken yet to accommodate them in a different hostel. No enthusiasm or interest regarding this matter is shown even after continuous and tiresome requests from the entire female post graduate residents since last two years.

Administration has to consider the following demands from our side:

PGTs have come from various parts across the country to AIIMS on our merit to become better them. But the present conditions and treatment met are seriously deteriorating our mental as well as physical wellbeing. In view of the recent mishap, and the constant neglect faced by us, we request administration to look into the matter with serious urgency as it is matter of lives.