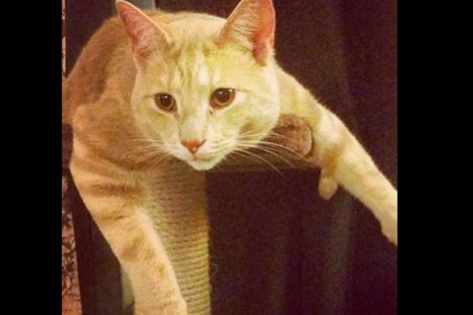 "According to the state health department, Gloucester County Animal Shelter’s feline kill rate was the highest in New Jersey at 69 percent in 2014, when it impounded 2,657 cats and euthanized 1,839." -CHRISTINA LOBRUTTO of Philly Voice.

The Gloucester County Animal Shelter, located in Clayton, NJ had the highest feline kill rate in 2014 for the state of New Jersey. Animals are nervous upon entering the shelter and are being put down for "behavioral issues" before the seven day holding period required legally by the state. Documentation does not clearly indicate those euthanizing animals are certified veterinarians, proper dosages of euthanasia are not calculated for each individual animal, and animals are being put down in unethical ways, by injecting euthanasia into the body cavity rather than an intravenous injection as required. Animals are not being scanned for microchips prior to euthanization, leaving their owners no opportunity to claim their loved pets.

Moe was a two year old house cat who was put down hours after animal control brought him to The Gloucester County Animal Shelter. His owner was not able to claim him, despite the fact that he was microchipped. When his owner was informed Moe had been found and brought to the shelter, she called to claim him as the owner. Upon calling she was informed Moe had already been put down for his "aggressive" nature. The owner claims Moe was not at all aggressive in nature and the shelters assessment of her defenseless cat was inaccurate and cruel.