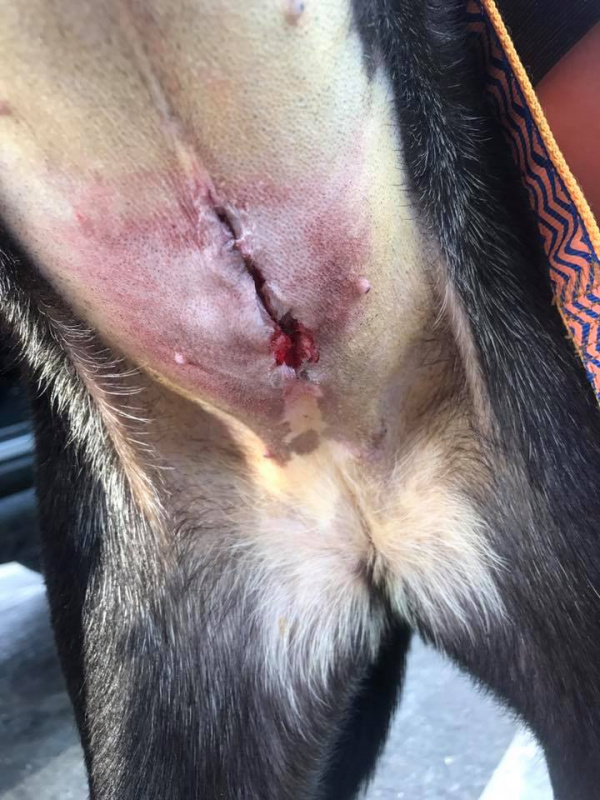 I am petitioning to get ARK Animal Hospital in Victorville, Ca closed FOR GOOD! They are fuel and DO not care about anybody's pets. Below I will attach the story that happened to my boyfriend and I's service dog Rucca.

Last night Amanda Pflughoft called ARK ANIMAL HOSPITAL in Victorville, Ca at 15714 Outer Bear Valley Rd to get my little girl Rucca fixed. They told Amanda that we could bring her in at 9:15 AM (which is not normal for a spay appointment.) This morning we left to take our 2 dogs to another vet to be fixed and then drove over to ARK. We got there at 9:11 AM to drop off Rucca. We got checked in and were told to call by 5pm, if we had not received a call. At 12:18 PM I called to ask if they would be able to get Rucca finished by 3:30 PM, because we had 2 other dogs getting done and their pick up was at 2:30 PM. I was placed on a 3 minute hold and then returned to the phone by Oixana stating Rucca would be the next spay in line and would be finished within an hour. She proceeded to tell me she was prepped for surgery and was ready to go with anesthesia. Then, once finished, she would have to wait the 2 hour minimum recovery time for the anesthesia to come off. We picked up our dogs and walked into ARK ANIMAL HOSPITAL at 4:33 PM. We waited for about 12-15 minutes before being rudely greeted by a NEW man working named IGOR (the same man that told us to come into the hospital at 9:15 AM for a spay.) He said he would check on Rucca. He then came back and said "HE is not finished I do not know why you are here." I then proceeded the explain what happened and how she was supposed to be done by promise time 3:30 PM. He said again that he would check on it. 10 minutes passes by and he comes out saying that Rucca was aggressive and would not take the medications to put her down. Then he told me it took 3 men to hold her down (and at check in she weighed 38.1LBS,) while Dakota Newton and I can hold her down with 1 arm. I continued to ask him questions such as; "would her body not take the medications?", and "Was she being aggressive or mean?" and he ten changed the story to she was not aggressive but fighting the medicines. I explained that she is Dakotas service dog and does not have an aggressive bone or angry bone in her body and he proceeded to yell at me. I told him I would wait after he urged Amanda and I to leave and come back. He said she just had gone into surgery and would be ready to go home by 6 PM. After he told me that he explained she was given the anesthesia twice today. Once I got upset and said she should have never been given it twice he changed his story again and said she was not given it twice, but that she was given PRE-MED twice, which is just as deadly. By this time i was fuming and i asked to speak with the vet, the vet would not see me, I continued to ask questions and be nosey aout the situation because of how deadly it could have been to Miss. Rucca. Around 5:15 PM a vet told us that she was out of surgery and could go home right then. I asked why they would send her home so quickly after they told me they needed a 2 hour recovery time. They said that wasn't the truth and stitched her up and brought her out. The vet himself walked her to our car. Then he proceeded to tell us that if we had any concerns to call by and they were open until 7 PM. We did not even get 5 minutes down the road to home and Rucca pooped and peed herself (which is not normal,) so we stopped and noticed the bleeding and hole in her belly as pictured. Then she thew up stomach acid all over the side of the road. I was crying and angry I could not believe it. I was furious and Amanda called ARK back and was YELLED at on the phone by IGOR while asking to speak with a vet. She then stated we would be pursuing legal action and he hung up the phone. We drove back to ARK to show them her wound and everything in the video is what happened after that. We got the run around from BOTH vets on duty. Then after the call we got into the car and went to another vet to have her immediately treated. There were no signs of internal bleeding or anything other than her gums being pale. He said she was over treated for anesthesia and give us his recommendations to help her stay comfortable overnight while we monitor her. I was writing this post for ALL others who have been mistreated by vets at this hospital or any other hospital. Please share our story so we can STOP ARK ANIMAL HOSPITAL from ruining dogs and peoples lives forever. Thank you for everyones concerns and support for Rucca, she is at home and resting currently. Will update as needed. I will also be attaching a form for people to sign to shut down ARK ANIMAL HOSPITAL and urge anyone to speak out against over medicating dogs and any other animals. Please share your stories below and sign my attached form to shut them dow for good and help the animals out. No cost is too great for our babies safety. Thank you.