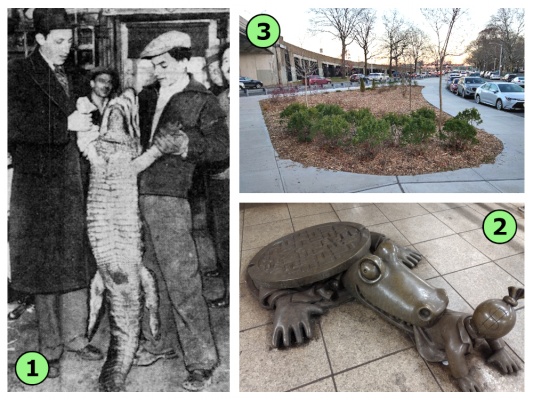 Generations of children, newcomers, and tourists have heard the claim that live alligators inhabit the New York City sewer system. Is it true? Ordinarily, no. However, on February 9, 1935 a live 8-foot alligator *was* found in an East Harlem sewer by a trio of teenaged boys. That exceptional encounter — which was described in papers across the U.S. and beyond (pic #1) — gave birth to the Gotham gator legend that has spread around the world!

The legend has inspired movies, written works, cartoons, t-shirts, and, most famously, the sculptures of Tom Otterness in the subway and at Metrotech (pic #2).

Such an important piece of New York City folklore deserves to be commemorated. To that end, we the undersigned support a proposal that would name a tiny new park (pic #3) near the site of the 1935 alligator encounter in honor of this great true-ish urban legend. The park could be called “Sewer Gator Park,” or “Alligator in the Sewer Park,” or simply “Alligator Park.”

Memorializing the legend with a park name would not just serve the historical record; it would also inspire civic and community pride. Signage and/or artwork might someday be installed at the park to tell the story of the teens and their wonderful, albeit frightening, discovery. And on every February 9th dignitaries, history buffs, and local families could gather at the park to celebrate Alligator in the Sewer Day with speeches, food, and fun.