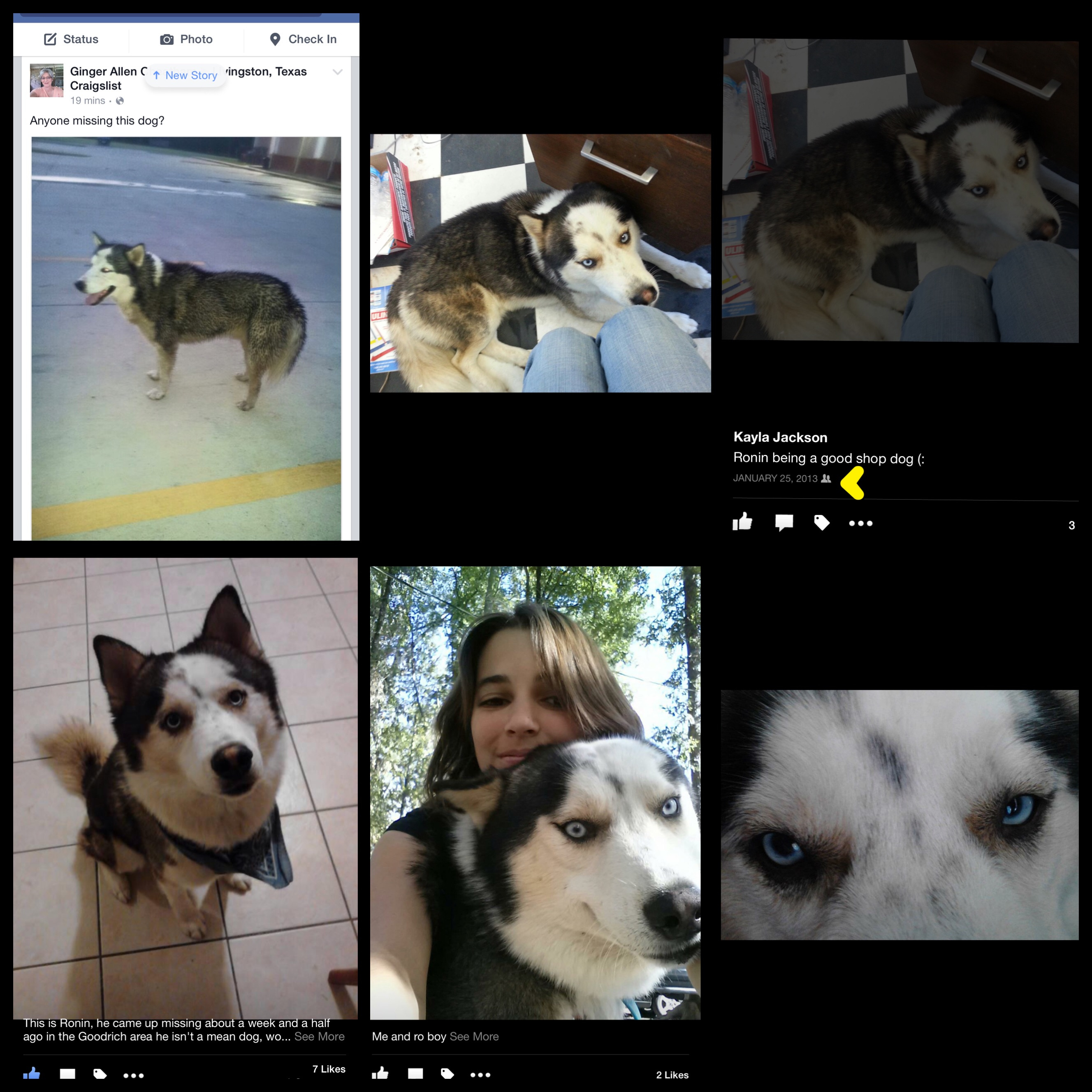 Update--because the police have let me down and given him back to his abusers, I am going to try to buy him back from them. I have asked the ACO that seized him to ask them a buying price for him and let me know. I cannot anticipate what that cost will be or if they will agree, but he will also need seen by a vet asap and it will be another $300 on top of that to allow him into my apartment. If you would like to help me get the funds together to save my dog, it would be greatly appreciated. If they refuse to sell him I will either find a way to refund the donations or forward them to the Texas sled dog rescue or husky haven. Youcaring.com/BringRoninHome

Ronin was stolen from me in early 2013, out of my mom's fenced in yard, in Goodrich tx. The fence was in tact, and her dog was injured as though he had been kicked.
Approx a year later she spotted him at the sale barn on 59 with puppies, but by the time she got turned around he was loaded up and was gone. I never thought that I would ever see him again. To this day I would have dreams about being reunited with him, and think about him often, about what it would be like to see him again and hear his BAWWAAWAAAWAAA talking to me.

I have scrolled through pages and pages of found huskies, Huskies for sale, etc over the 2 years he was gone, and never have I ever burst out crying and shaking like I did the moment I laid my eyes on Mrs. Ginger's post saying "is this anyone's dog?" I knew right away it was him. I began to beg anyone in the area to go get him so that he wouldn't get away while I made the 1.5hr drive to cleveland. I finally resorted to asking animal control to pick him up.

Animal control told me over the phone that he was too emaciated to use a tranquilizer... He finally lured him with treats. When he secured the dog, he discovered a POWER CORD.... Plug and all... Wrapped around Ronin's neck. A Hispanic lady said "hey that's my dog" and the ACO said that ronin got defensive and laid his ears back. He asked "if it's your dog, care to explain the cable on his neck?" She then said "oh he really belongs to a man in Houston, he let me borrow him for 2 weeks." ACO seized the dog.

He called me back to ask if I had any identifying markers to look for. Huskies coats change drastically as they age, but ronin has 2 permanent markers that I will never forget. He had scars around his neck from his very 1st owner, and a crooked bottom k9 from getting into a tiff with a larger dog who injured his jaw.

The vet confirmed those 2 important markers over the phone, before I even laid eyes on him, and he confirmed one more thing that is keeping me from bringing Ronin home.... The current "owners" have him microchipped.

When I saw him I fell to my knees crying. He seemed to be limping, he's covered in sores, sores all over his face that looks like he's been chewed on by another dog, hair falling out around his neck where the cable was... Filthy... Skinny... Wreaking of infection. The worst part was looking in the face of the animal that was once the image of happiness, pride, and pure intelligence, and seeing a sad, scared, broken dog. He paced nervously, then put his head in my chest and I hugged him and kissed his head despite his filth. I told him that I would be right back, and signed the papers to release him to me. The ACO had to step out on a call, and when he returned we were supposed to go give him and bath and he'd be on his way home. When he returned we discussed the microchip and he said I needed to file a police report. We talked to chief Broussard who ultimately decided that they needed to do an investigation and that I wouldn't be able to bring him home. I turned in my vet records, and sat in my car bawling for 30 minutes before making the heartbreaking drive home without him.

Regardless of what "ownership" claim those people have, I don't understand why there's even a question of who should have him here..... His condition should answer that question right away!!!

The police chief gave him back to the "owners" because they "confirmed him being in the Cleveland area for breeding purposes, and had pictures of him as s puppy".

I told him in my response email that I am not convinced by puppy pictures when he is obviously breeding, which would obviously mean he has puppies to take photos of, and huskies never look the same way they did as puppies.

I don't understand why he wasn't able to provide vet records, particularly records with the date on the the microchip. I feel like Cleveland pd has dropped the ball and let these people get away with animal abuse, and treating him like a puppy mill stud.

My dog has extremely unique facial markings... I've never seen another dog that had markings like his. So while I may not have pictures of a puppy, I can't believe that none of my other pictures counted for nothing.

Cleveland pd had sent me the message that not only is it acceptable to abuse and neglect your animals, but you can just go out and steal a dog, chip it, and look up some puppy pictures online and BOOM it's your dog.

I am heartbroken and extremely disappointed.

I've made contact with the ACO again, he said that he is checking on him and is unsure why they made the decision to give him back to them. I asked him to please make contact with the "owners" and ask a price for him. He asked "so you can buy him back?" (So even he knows that Ro is rightfully mine) and I said of course yes.. He seemed nervous and said he didn't think that was a good idea but would talk to the chief and see what he could do.