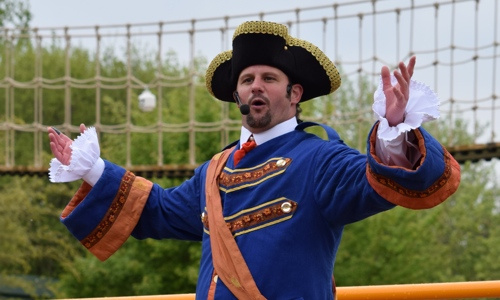 Send Birdsnest up to the Lighthouse

Every day, Captain Horatio Birdsnest (the greatest pirate captain to sail the Seven Seas) and his crew from the Pirates of Skeleton Bay at Legoland Windsor fight to defeat the Red Pirate.

Each day he and his crew line up to volunteer to climb up the lighthouse.

Every day Birdsnest "takes one step forward" to volunteer and yet he never gets the opportunity to climb up the lighthouse.

He claims to be "scared" but rumour has it he secretly wishes he could climb to the top of the lighthouse but isn't allowed to.

This petition is to give Birdsnest the chance to one day climb up the lighthouse. Whilst this unlikely to happen during the show, due to the format, it would be great to see Birdsnest one day at the top of the lighthouse - maybe before the show or between shows. If required I'm sure he could wear the harness used by the Friends show - although of course the ultimate would be for him be trained how to jump from the top.

Sure - this is just a bit of a laugh but wouldn't it be great to let Birdsnest finally fulfil his destiny?!! Please sign it to encourage the Entertainment team to allow Birdsnest up the lighthouse.