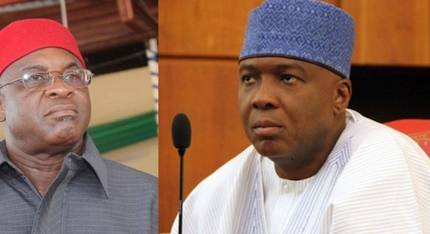 Nigeria’s immediate past Senate President, David Mark, has links to at least eight offshore shell companies while holding public office, in violation of a federal code of conduct law, a massive leak of files belonging to Mossack Fonseca, a law firm in Panama, shows.

The files, seen by PREMIUM TIMES, show how Mossack Fonseca, reputed as one of the most secretive companies in the world, helped clients register offshore entities, some of which are then used to launder money, evade tax and dodge sanctions.

They also provide details of the hidden financial dealings of 128 more politicians and public officials around the world, including in Nigeria.

The trove of 11.5 million files shows how a global industry of law firms and big banks sells financial secrecy to politicians, fraudsters and drug traffickers as well as billionaires, celebrities and sports stars.

The revelations are among the findings of a lengthy investigation by the International Consortium of Investigative Journalists, German newspaper Süddeutsche Zeitung and more than 100 other global news organizations – including PREMIUM TIMES.

PREMIUM TIMES is the only Nigerian publication involved in the investigation, which lasted a year.

As a former senate president, Mr. Mark stands out among other notable Nigerians named in the files.

The 68-year old former military officer spent the last 40 years covered by the investigation largely as public office holder. But he is widely seen to be far richer than his legitimate incomes could have provided.

He served as military governor of Nigeria’s north-central state of Niger, minister of communications, and later as president of the Nigerian Senate from 2007 to 2015.

Mr. Mark has been in the senate since 1999, and remains a senator of the federal republic, representing Benue South Zone in the upper legislative chamber.

Mr. Mark and his secret companies

The Mosseca Fonseca database show that Mr. Mark is one of Nigeria’s most extensive users of offshore shell companies, even while being a public official.

In documents, Mr. Mark was linked to eight active companies registered in the British Virgin Island.

In the documents, Mr. Mark was repeatedly marked as a politically exposed person, and at a point the former Senate President had to send documents, across to Mosseca Fonseca to prove that he was clean.

It remains unclear what businesses Mr. Mark is conducting with the companies.

While not all owners or operators of such offshore entities are criminals, owning or maintaining interest in private companies while serving as a public official is against Nigerian laws.

Section 6(b) of the Code of Conduct Act says a public office holder shall not, “except where he is not employed on full‐time basis, engage or participate in the management or running of any private business, profession or trade”.

Mrs. Mark operated an account with the Swiss branch of HSBC, but with details made largely secret.

Although she was known within the bank as the beneficial owner of the account, she was largely identified with a secret code – 14312MP.

Mrs. Mark opened the account on December 18, 1989 and closed it on July 12, 1991. About that time, her husband, then a top ranking army officer, had served as military administrator of Niger State and federal minister of communications, a period during which he is believed to have made a fortune.

Court papers during a messy divorce with his wife suggested that some of Mr. Mark’s children schooled in Switzerland, but it is not clear whether it was during that period that Mrs. Mark operated the HSBC account.

About six million pounds in four accounts – three at the Northern Bank, Isle of Man, and one at the Allied Irish Bank, Jersey – were frozen in October 2000 as a result of the ancillary relief sought by Victoria Mark in the couple’s divorce case.

Part 1, Section 7 of the Code of Conduct law provides that, “Any public officer specified in the Second Schedule to this Act or any other persons as the President may, from time to time, by order prescribe, shall not maintain or operate a bank account in any country outside Nigeria.”

If the Code of Conduct Bureau decides to slam charges on Mr. Mark following the #PanamaPapers revelation, the politician may lose his senatorial seat, a position he won back just on February 20 after his initial election of March 28, 2015 was annulled by a tribunal. His fiercest challenger had alleged irregularity.

Section 23 of the Code of Conduct law, which stipulates punishment for violators, say:

(1) Where the (Code of Conduct) Tribunal finds a public officer guilty of contravening any of the provisions of this Act, it shall impose upon that officer any of the punishments specified under subsection (2) of this section.

(a) vacation of office or any elective or nominated office, as the case may be;

(b) disqualification from holding any public office (whether elective or not) for a period not exceeding ten years; and

(c) seizure and forfeiture to the State of any property acquired in abuse or corruption of office.

The #PanamaPapers had on Monday exposed Mr. Mark’s colleague in the Senate, Bukola Saraki, as failing to declare at least four assets belonging to his wife, all tucked away in secret offshore territories, as required by Nigerian laws.

But the President of the Senate denied any wrongdoing, saying he “declared his assets properly in accordance with the relevant legislation,” and that the charges against him “are both unfounded and politically motivated.”