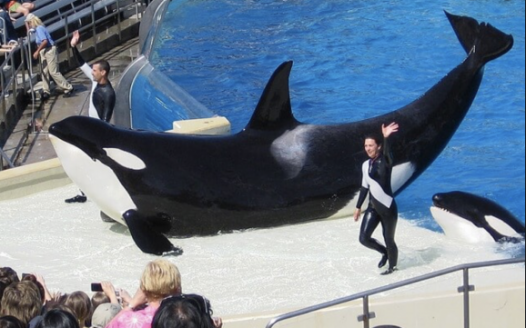 If we allow the Southern resident Orcas to go extinct it would be the first extinction in which everyones name was known... Alexandra Morton, American Canadian Biologist.

There is reason to be hopeful for Corky because she is still alive! This December 11th is the 50th anniversary of her capture, unreal that she has survived so long, but reason for hope. The missing piece is a conversation with SeaWorld... Dr. Paul Spong

Tell SeaWorld to release Corky back to where she came from, her family still exist in British Columbia!! Let her be reunited with her family!

SeaWorld please release her now! She will survive, living in her natural surroundings.

Corky's History: Corky was estimated to have been born in 1965. Her mother, designated A23, nicknamed "Stripe", died in 2000. Around the age of four, Corky was captured in Pender Harbour off the coast of British Columbia on December 11, 1969.[1] Corky, along with a young unnamed male and a young female later named Patches, were sold to Marineland of the Pacific, in Palos Verdes, California. Of the animals captured on that day, only Corky still survives. Corky and Orky were placed with the other orcas at SeaWorld, in a system of pools much larger than those they had lived in at Marineland. Orky was desired primarily for SeaWorld's new successful breeding program, and while at SeaWorld he sired two female calves, Orkid, who is still alive, and Kayla, who died as of 2019.

In 1987, Orky II along with another female named Nootka were involved in an accident that injured trainer John Sillick. During a show for the public, Sillick was riding on Nootka's back when Orky received a signal to breach. Sillick's back, leg, and pelvis were broken when Orky landed on top of him; the accident was attributed to another trainer not realizing that Sillick was riding Nootka in the same area that Orky was instructed to breach.[1] He was permanently disabled as a result of the attack,[2] which may or may not be considered a case of orca aggression, or perhaps just a miscue on the part of trainers.

In 1989, the dominant orca at the park, Kandu V, attempted to rake Corky — a way orcas show dominance by forcefully scratching at another with their teeth. Kandu charged at Corky, attempting to rake her, but ruptured an artery in her own jaw. The people in the stadium were quickly ushered out, and after a 45-minute hemorrhage during which she swam alongside her calf Orkid, Kandu V died. Orkid, orphaned at only 11 months old, was placed with Corky, and the two remain together at the park to this day. Orkid and Corky were bonded for several years after the death of Kandu V.[2][3][4]

Today, Corky lives with nine other orcas: Ulises, Orkid, Keet, Nakai, Ikaika, Kalia, Makani, Shouka and Amaya. Corky is one of the more gentle whales in captivity; before trainers were prohibited from entering the water with whales, Corky was primarily the whale with which a beginning trainer entered the water with a whale for the first time. She has adopted and partially raised a number of whales since her move to SeaWorld: Orkid, of course, as well as Splash and Sumar (both now deceased), and was also seen caring for Makani after his mother died.

Corky can be identified by her tall, straight dorsal fin, her pointed eyepatches, and most distinguishing, her large size for a female. She also tends to swim upside down in the pools.

Corky is as of May 2019 approximately 54 years old, and has lived in captivity for 50 years. She suffers from cataracts in her right eye, though it does not seem to impair her daily activities.