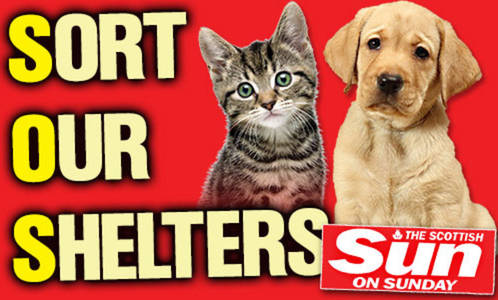 The Scottish Sun On Sunday

2882 people have signed this petition. Add your name now!

The Scottish Sun On Sunday
2882 people have signed. Add your voice!
29%

THE Scottish Sun on Sunday today launches our Sort Our Shelters campaign to save abandoned animals from neglect at rogue rescue centres.

We are demanding a radical shake-up of the law to ensure pet sanctuaries are closely monitored and bound by strict standards.

Our crusade comes after we exposed sickening conditions at the Ayrshire Ark and highlighted the plight of rescue dog Ozzy — who was shown lying dead there on a filth-strewn floor.

We know that horrifying image moved our caring readers to tears.

So with your help, we want to fix this shameful situation.

The Scottish Government has so far only said it will look at the possibility of regulation.

Some sources claim a licensing regime could be expensive and complex. But we urge you to sign our petition calling for regulation to be enshrined in law to hold refuge owners accountable.

Scores of genuine havens offer love and car to animals in need.

But for every honest shelter, others keep homeless pets locked up in appalling conditions.

At present, anyone can open a pet refuge and operate without any monitoring.

As our Ayrshire Ark stories show, animals can die or live in squalor for years.

Scottish SPCA officers visited it twice in the weeks before we exposed how it was run.

Their visits were triggered by the determination of campaigners who feared for dogs kept there.

But the charity insisted there was not sufficient evidence for warrants to fully check the premises in Patna, Ayrshire — and instead gave the owners welfare advice.

It wasn’t until The Scottish Sun on Sunday stepped in that the surviving dogs were saved.

It’s true that such sanctuaries, which deal with powerful bull terrier breeds, sometimes take on more than they can handle.

But that is no excuse.

Sign our petition today and together, we can fight to protect our pets in need — and prevent another Ayrshire Ark happening.