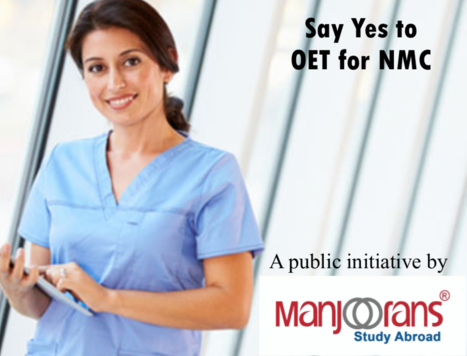 Say Yes to OET for NMC

Manjoorans Educational Academy Private Limited started its operation in 1985 as an English Language School in the state of Kerala which is in the southern tip of India. Registered with the Government of India as a private limited company we have been catering to the needs of students preparing for various international examinations. From our experience, nurses are finding it quite difficult to get the 7 band score in IELTS.The academic module of IELTS is primarily for those who want to study or train in English speaking institutions.OET tries to imitate the target workplace and was designed by both health professionals and language experts together.

The Nursing and Midwifery Council intends to carry out a “stocktake” of the test it uses to assess the English language skills of overseas nurses and midwives, following discussions with the Department of Health. We strongly feel, this is as good a time as any to push for the acceptance of OET as an alternative to IELTS.

We request NMC to

Lower the IELTS band score requirement for nurses to 6.5

OET tests English in a medical context, so it can be said to be of greater benefit to the candidate in their future employment.By taking up OET, nurses would be able to perform much better, compared to IELTS. Moreover there is no justification to keep the required band score as 7. The NMC needs to accept OET as an alternative to IELTS and also lower the IELTS band score requirement to 6.5.

About 40,000 nursing posts are now vacant in the NHS in England as the service heads for the worst recruitment crisis in its history, according to official new data.Responses to Freedom of Information requests submitted to trusts by the Royal College of Nursing (RCN) show that one in nine posts are now unfilled – double the level in 2013The data obtained by the RCN also suggests that fewer care providers are now employing registered nurses, raising new fears over patient safety.

The statistics, obtained by the BBC, show the scale of the NHS recruitment crisis.Health unions blame poor workforce planning, but officials say the NHS has more staff than ever before.Data from a BBC Freedom of Information request shows that on 1 December 2015, the NHS in England, Wales and Northern Ireland had more than 23,443 nursing vacancies - equivalent to 9% of the workforce.