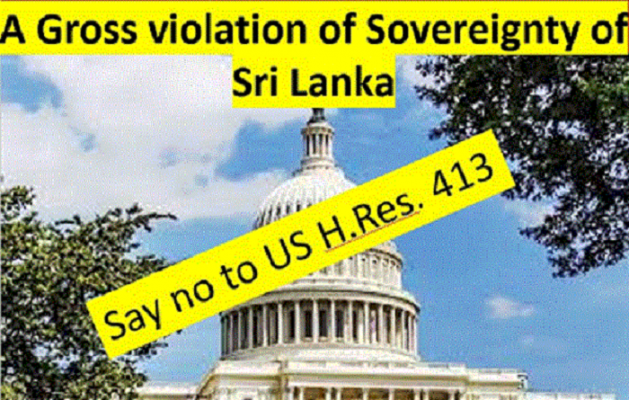 Say no to United State H. res. 413, an injustice for all Sri Lankans

Your signature is vital to stop unwarranted aggression against Sri Lanka

“H.Res.413 - Recognizing 12 years since the end of the war in Sri Lanka on May 18, 2009, honoring the lives lost, and expressing support for justice, accountability, reconciliation, reconstruction, reparation, and reform in Sri Lanka to ensure a lasting peaceful political solution and a prosperous future for all people of Sri Lanka.”

The H. Res. 413 brought forward by Rep. Ross Deborah on 18th May 2021 has deliberately ignored their own rulings on ruthless terrorism and proscribed terrorist organizations and identified LTTE and other terrorist groups as “Tamil independence organizations” which is an act of interference in internal matters of a sovereign state. The resolution drafted totally based on lies and unsubstantial evidence gathered for OISL report (2015) and the Panel of experts (Darusman) report (2011). The resolution replicate same arguments, setting aside all proven facts and reports produced by international observers, UN officials, Diplomats, and high-level government officials at the time of ending terrorism. Further, the resolution recognizes the Northern and Eastern regions of the country as the “traditional Tamil homeland” for the first time in the history. The resolution ignores the legal status of Northern and Eastern regions as separate provinces in Sri Lanka terming it as one unit called “Northeastern region”. This is a deliberate attempt to recognize the territory in line with the myth of the LTTE terrorist organization.

Please refer the link for the complete resolution: https://www.congress.gov/117/bills/hres413/BILLS-117hres413ih.xml

The resolution seeks the approval of House of Representatives to;

(1) acknowledges the 12th anniversary of the end of the war in Sri Lanka and offers its deepest condolences to all those affected by the conflict.

(2) honors the memory of those who died and reaffirms its solidarity with the people of all communities in Sri Lanka in their search for reconciliation, reconstruction, reparation, and reform.

(3) commends the United Nations Human Rights Council for prioritizing the collection and preservation of evidence related to human rights violations, a process that must not be interfered with by the Government of Sri Lanka.

Note - Refer the attached to understand gross violations of human rights carried out by LTTE, https://www.lankacourier.com/2021/02/sri-lanka-lttes-brutality-on-tami.html

(4) recognizes the bravery and commitment of advocates for justice across all communities in Sri Lanka, including the Tamil families of the disappeared, whose protests and demands for answers have at times been met with threats, intimidation, and harassment by government security forces.

Note – Killing in cold blood of 600 policemen who surrendered to LTTE in 1990, https://en.wikipedia.org/wiki/1990_massacre_of_Sri_Lankan_Police_officers

(5) urges the international community to advocate for and protect the political rights and representation of the historically oppressed northeastern region of Sri Lanka and work towards a permanent political solution to address the underlying issues that led to ethnic conflict.

(6) recommends the United States explore investigations and prosecutions pursuant to the recommendations of the United Nations High Commissioner for Human Rights; and

No war crimes committed by the heroic Armd. Forces in Sri Lanka. The humanitarian mission carried out by the Armd. Forces rescued 300,000 Tamil civilians used as a human shield by the ruthless LTTE terrorists. Let’s fight for the truth. Power of your signature will reinforce the fight against terrorism as a unified front of peace-loving world citizens.

By signing the petition, we request Representatives of the Congress not to proceed the resolution 413 and request to recognize human rights of all citizens in Sri Lanka.