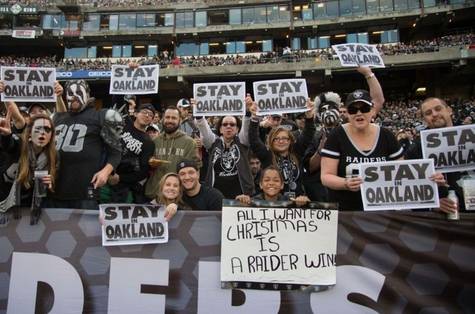 Say NO to the Raiders proposed move to Las Vegas!

714 people have signed this petition. Add your name now!

On April 28, 2016, Mark Davis recently committed in agreement with Sheldon Adelson and David Beckham, to pledge money to a privately funded stadium in Las Vegas, Nevada. This move makes very little sense on many levels.

A proposed Raiders move to Las Vegas would go against the NFL's continued policy against gambling. While current fantasy sites are purported to be gambling, these sites are located in various locales, and federal law explicitly gives exceptions to these services, putting them at a different level against casino gambling. In addition, the stadium is being funded by a casino mogul, which could seriously threaten the credibility of the NFL, and go against its anti-gambling policy.

Nevada is not only known to have a local gambling economy, but has a very large sex and drinking industry, and prostitution is legal in many parts of Nevada. This could bring serious consequences to the moral image of the NFL, but also could seriously affect the attitude of the players; with recent issues of NFL players being arrested for drugs and alcohol, this could be another serious blow to the NFL's image.

Las Vegas is also a terrible media market, compared to the San Francisco Bay Area or Los Angeles Metro. It ranks 42nd in the country, which means there is a lack of profits to be made. Staying in Oakland, or moving to Los Angeles, would be much wiser long term, especially given that many Raider fans are based in California.

We, the undersigned, call on the Roger Goodell, the NFL, and its owners, to vote NO, and/or BLOCK a proposed Las Vegas move. Moving the Raiders to Las Vegas could very seriously hamper the image of the NFL as a whole as it gets consumed in a concussion and morality crisis, and could disenfranchise one of the NFL's greatest fanbases.