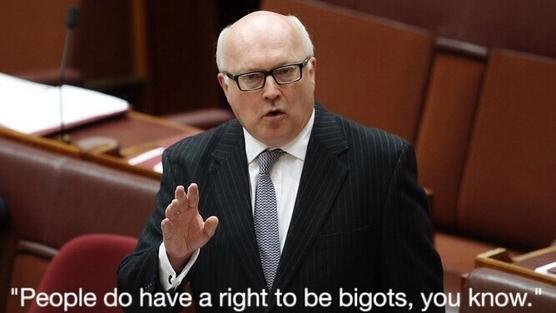 No Tolerance For Racism Victoria 0

Say NO to RACISM! Senator BRANDIS proposing license to be a BIGOT?

No Tolerance For Racism Victoria 0 Comments
39 people have signed. Add your voice!
39%

A person who is utterly intolerant of any differing creed, belief, or opinion is known as a bigot.

Attorney General George Brandis has proposed a repeal to the racial vilification act 18 c, this is the act that makes it unlawful to “offend, insult, humiliate or intimidate” someone because of their race or ethnicity in public.

If these changes take place it will encourage racist abuse in public no matter how unreasonable the comments might be.

When the Attorney-General talks about Australia being free country it is arguable that you are permitted to be a 'bigot' in private where you are away from anyone who might hear you and get offended. Australia is country which initially encourages respect for its multicultural society.

Should public humiliation because of a persons race really be licensed?

For nearly 20 years the racism laws have been protecting people from hatred and humiliation that bigots have to offer and providing justice for those who are affected.

This promotion of racism in the 21st century is just unacceptable and degrading to Australia which is recognized for its diverse ethnicity and multicultural acceptance.

Sign this petition and say NO TO RACISM and NO TO racial vilification 18 c REPEAL!