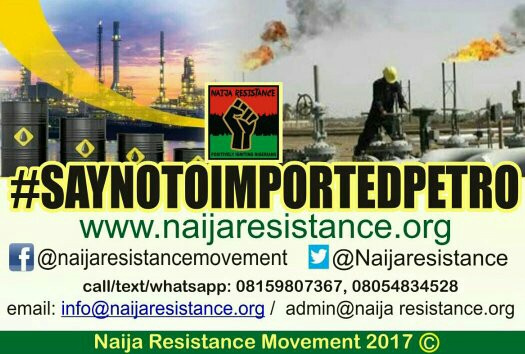 SAY NO TO IMPORTED PETRO

NAIJA RESISTANCE MOVEMENT CALLS FOR AN IMMEDIATE MASS BOYCOTT OF IMPORTED PETROL: #SAYNOTOIMPORTEDPETRO CAMPAIGN IS THE ONLY SOLUTION TO NIGERIA OIL CRISIS!!!

Naija Resistance Movement condemns in strong terms the Buhari-led government and the oil cabals parading as marketers for worsening the already bad, inhumane condition of the teeming population of Nigerian poor masses with the recent scarcity of petrol. The point remains that since this government fully implementated the policy of deregulation and privatization as far back as 2015, the oil sector has been subjected to the unthreatened monopoly of the oil marketers and their international capitalist colleagues. A special report by the Punch newspaper published on the 6th of December exposed that the shortage in the supply of fuel is currently enormous because the NNPC for the past few months now has been singlehandedly importing the products into the country. The reason for this was provided by the oil marketers when it was made known in the same report that the landing cost of fuel has skyrocketed and as such they disclosed to the government that they could no longer sell petrol for N145 but between N165 – N170. But it is becoming apparent that the NNPC, due to several internal anomaly that frequently bedevils the corporation, cannot continuously on its own undertake the project of oil importation, hence the recent upsurge of oil scarcity. It is extremely important to state that this usual tragedy that compounds the oil sector is a bandwagon effect of the utter failure of both past and present governments to build for the country functioning oil refineries. Nigeria today is the only country among the hosts of other countries in the Organization of Petroleum Exporting Countries (OPEC) that imports oil products on daily basis. This is not just a national shame but also a show of incompetence, barrenness and unproductiveness of members of the Nigerian ruling class.

WHAT IS TO BE DONE?

We the members of Naija Resistance Movement therefore demands from the Nigerian masses the need to immediately kickstart a mass action that will not just put to an end the curent oil scarcity, but ultimately a mass action that will totally liberate the oil sector from the claws of the neoliberal, imperialist and capitalist agenda of Nigerian indigenous capitalists and their foreign allies.

JOIN US AS WE STRUGGLE FOR THE FOLLOWING DEMANDS