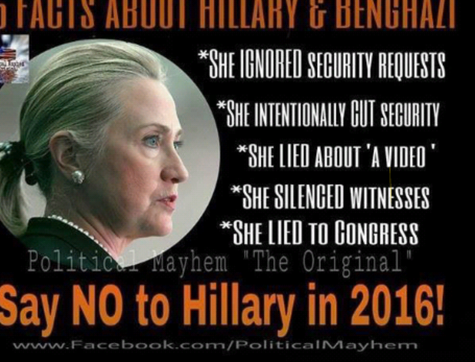 Say NO to Hillary Clinton

Keep Hillary out of the White House.

Seven reasons to Say NO to Hillary Clinton

1. Hillary Clinton is a liar. I don’t mean this as political conjecture, but a proven, verifiable liar. She lied about the Irish peace process, her vote in favor of the Iraq war, her reason for illegally using a personal email server, that her family was dead broke when they left the White House, about landing under sniper fire in Bosnia, where Chelsea was on 9/11, who she was named after, Benghazi… and the list goes on. We don’t need a liar-in-chief. We tried that already. It didn’t work.

5. Hillary Clinton is endorsed by Barack Obama. (Although, given his track record, he may not have meant what he said about her being an “excellent choice” for President.) Ask your friends if they’re better off now than they were six years ago. Ask your friends if they like the direction the country is headed. If they answer “yes,” then they might actually legitimately like Hillary. But if they want some serious hope and change, they can’t vote for more of the same.

6. Hillary Clinton wants women to shut up. At least all of the women who tried to come forward regarding her hubby’s sexual harassment, misogyny and overall perpetuation of “rape culture“. She referred to these victims as “trailer trash” and even went so far as to threaten one of the victims in person.

7. Hillary Clinton is not a champion of the middle class. Despite her campaign slogan, she is definitely not just like you. Hillary Clinton was married to a President, had a personal chef, flies in a environment polluting personal jet, has sent her daughter exclusively to private schools, and makes about $200K for every speaking engagement. That’s so you, right? And your middle-class neighbors – they’ve got a private jet out back, yeah?

America’s not ready for Hillary. But we are ready to take our country back.