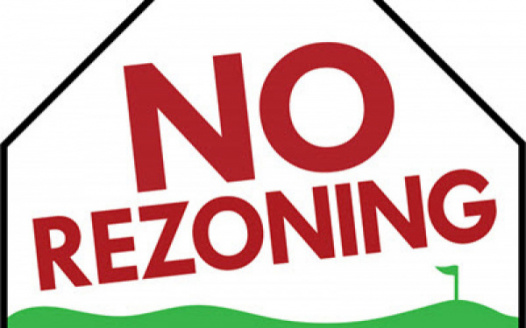 Your address must be included in the comments section of this petition so the City of Colleyville can verify that you are a resident. This petition is in opposition to the proposed re-zoning request currently under consideration by the City of Colleyville Planning & Zoning Committee to turn the existing soccer fields on Glade and Roberts Rd. into a large for profit commercial assisted living facility by Covenant Church. We are asking residents to voice their opinion NOW in opposition of this re-zoning request before it is too late by signing this petition (please include your address in comments) and voicing your opposition to this re-zoning request in person (or in writing) at the upcoming P&Z meeting on September 11th at City Hall (3rd floor). The P&Z committee (to whom it was suggested that this be approved pending resident support) was discouraged by the lack of attendance and opposition to this proposal during their August 14th meeting and as such has tabled a final approval of the commercial re-zoning until their upcoming September 11th meeting. THE TIME TO OPPOSE THIS IS NOW. The proposed commercial development will be put in the middle of residential neighborhoods Prestwick Park, Woodland Hills, Copperglenn, Fox Meadows, Heritage Glenn, Strathmore and other surrounding neighborhoods near Glade Road.

The current commercial construction plan calls for 6-8 large commercial buildings to be built directly on top of the current soccer fields at Glade and Roberts Road that will house approximately 90 residents. There will also be a number of staff employees to take care of residents on a 24 hour basis. Commercial construction on Glade Road will last anywhere from 2-4+ years depending on the success and vacancy rates at the facility. The development will require significant concrete space as compared to today for resident and employee parking and will increase ambulatory and fire truck traffic to the current residential area. The commercial facility does not seem to fit or be appropriate for the existing residential heavy area. This development also seems to differ from the City of Colleyville's intended use for the land as outlined in their Master Plan - Future Land Use Map.

Parks, green space, schools, athletic fields and Colleyville's residential feel make our city a sought after and unique destination. These green spaces and parks/athletic fields also contribute significantly to our property values and this commercial development has the risk of negatively impacting the value of our homes.

PLEASE OPPOSE THIS RE-ZONING REQUEST BY SIGNING THIS PETITION TODAY!!