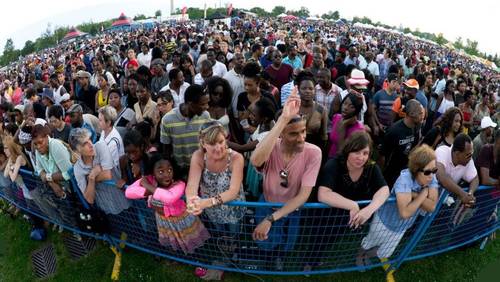 The City of Toronto has limited Afrofest at Woodbine Park down to a one day event from its traditional two day (Saturday-Sunday) format. This move will not only make it difficult to organize a viable festival but also hinder its growth and community impact. The reasons given are that permissible sound levels and permitted time frames were exceeded in previous festivals. Afrofest organizers maintain that these allegations are inaccurate.

In 2000, Afrofest changed its format and became a two-day festival held Saturday to Sunday at Toronto’s Queen Park, a venue that became its home until 2012. By 2012, attendance grew to 100,000 visitors who attended the festival over two days.

Afrofest was seen by City of Toronto officials as having “outgrown” Queen’s Park and in 2012 the event was moved to Woodbine Park. The move was successfully managed and the festival continued to grow. Today, Afrofest attracts over 120,000 festival goers.

Afrofest started in 1989 and is the largest annual African music festival in North America. The festival, which draws a crowd of up to 60,000 daily, has become an extremely important African celebration locally and internationally. It has created an environment where communities come together as fellow Africans as well as provide a chance for the general public to experience and appreciate Africa’s cultural offerings.

Where we stand now…

Peter Toh, President of Music Africa, the organizers of Afrofest, called the decision completely unfair and discriminatory. “The sound company we employ works with most of the events at Woodbine Park, including Canada Day and Beaches Jazz festival concerts, and use the same sound equipment, crew and sound levels. The volume at Afrofest is no different than at those events but in our case they are being called violations.” Toh also added that the City had agreed, in writing, six months prior to Afrofest 2015 to allow it run later in order to accommodate a ceremony for the Pan Am Games, then just two weeks before the changed the permit conditions. “There seems to be no understanding of the contractual obligations we had, both to accommodating the Pan Am Torch Relay and to the headline act that followed”.

“Music Africa is always willing to work constructively with City of Toronto officials but it seems that while they wish us well, they in fact set conditions to jeopardize success. This seems in complete contradiction to Toronto’s official “Music City” initiatives”, Toh adds.

Music Africa is calling on all the supporters of Afrofest to write, phone or email the City Councillor, Mary Margaret McMahon (councillor_mcmahon@toronto.ca, 416-392-1376) and the Mayor John Tory (mayor_tory@toronto.ca, 416-397-2489) to express your concerns about their decision.

In addition to voicing your concerns to fellow councillors, please sign this petition in support of maintaining our two day festival.