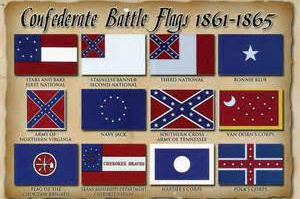 Southern Americans have a unique heritage. One hundred and fifty years ago, our forefathers felt that the northern states were unjustly impeding their rights. Just like the colonists did that founded our nation, they rebelled and separated from the union. Over the next four years, many of them died to protect their beliefs. This has nothing to do with racism. It had nothing to do with slavery. The War of Northern Aggression was fought for the exact same reasons as the Revolutionary War. Get a history book and educate yourself if you disagree. Today as a southern American, my history is under fire. People are attempting to remove the Confederate history altogether. It has started with a battle flag that was flown only going into battle. Now they are trying to change names of State parks which bears the names of any Confederate General. They are trying to remove the carving from Stone Mountain which depicts three of the greatest military leaders this country has ever seen. We must make our voice heard to our state capitol. Please sign this petition so we can. Thank you.