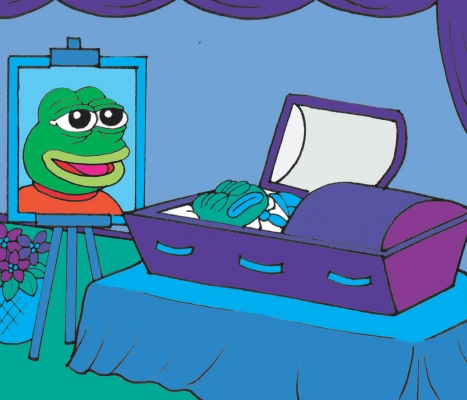 We the signatories implore the Anti Defamation League, ADL, to remove the designation of Pepe the frog or any likeness as a hate symbol.

In 2006, Matt Furie created Pepe the Frog as part of the Boy’s Club comic book. Pepe began as a blissfully happy frog where he enjoyed a simple life of snacks, soda and pulling his pants all the way down to go pee. Pepe’s reputation became globally recognized as a positive, sometimes sad, but mostly silly character. In a move of artistic frustration, Furie preemptively “killed” Pepe drawing him in an open casket surrounded by his fellow Boy’s Club friends. Currently Furie launched a #SavePepe on kickstarter as a means to try resurrect him. This petition is a continuation of the efforts to #SavePepe as a means to restore his reputation and good name so that we can feel good again.

Last year, the ADL designated Pepe as a hate symbol due to the appropriation of it by the alt-right. We believe that label erroneously normalizes the legitimacy of Pepe as an agent of hate and we wholeheartedly reject that notion. Pepe and the ADL, believes in “the power of inclusion and uniting people from diverse groups.” Pepe stands for peace, acceptance, and love. It is with that message in mind that we ask you to join us in restoring Pepe’s positive image to who he was, who he is, and who he is to become.

In response to the negative effect of the ADL’s designation of Pepe. This petition is a call to action imploring the ADL to remove Pepe as a hate symbol and to join us in restoring Pepe’s positive reputation. By signing this petition :

We reject the normalization of hate of any kind

Please help our cause by signing this petition and save Pepe’s reputation. Thank you for your support.