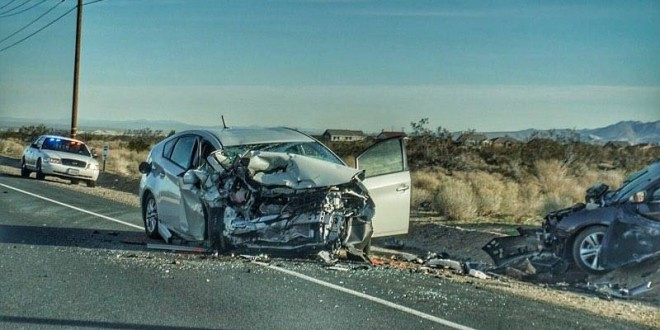 Highway 395 is notorious as being one of the deadliest highways in California. The vast majority of the Highway, between Inyokern and Adelanto, CA (an 80 mile stretch), has only 1 lane for each direction with very limited safe passing opportunities. The result is a significant number of high speed, head-on collisions each year. Locals have dubbed it Blood Alley and many will drive as much as an hour out of their way just to avoid it.

This petition is to add additional passing lanes and a raised concrete median.

The Highway has been home to countless accidents with a recorded death toll climbing in the mid 200's. Unfamiliar drivers get excessively impatient when stuck behind semi-trucks or RV’s. It is all too common that drivers will cross two sets of solid yellow lines and a rumble strip to pass. A lapse of judgement that often leads to head-on collisions resulting in fatal, critical or permanent injuries.

Dips and bends in the road make it nearly impossible to see oncoming traffic. The road ahead may give you the illusion that it's completely clear but oncoming vehicles are often hidden from view. Driver's who decide to pass in these "no passing zones" don't realize that there is a vehicle coming towards them until the final countdown and motorists have only seconds to react. Two vehicles traveling toward each other at 60 mph (88 feet per second) need nearly a football field’s length of road to first perceive the other vehicle and then react accordingly. In one second, they have already covered 176 feet. Reaction time is about 1.5 seconds.

Too many have lost loved ones or have been permanently injured at the hands of a reckless driver and unsafe driving conditions. Government officials and the Department of Transportation cannot continue to slap band-aids on this road. Rumble strips DO NOT WORK. We must stand together to demand more lanes, a road divider and an altogether safer highway!