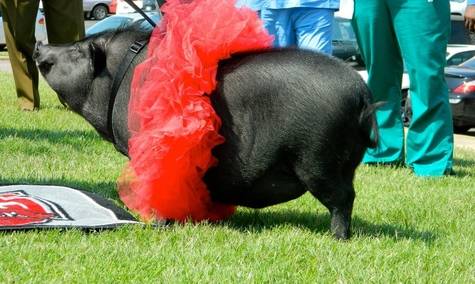 2040 people have signed this petition. Add your name now!

History of the Potbelly. The first imports to the US occurred in 1986. US zoos were the main target for the piglets, but private owners soon began purchasing them as pets. Potbellies are very smart, they are ranked just behind primates and dolphins and are said to have the intelligence of a 3-4 year old child. They make great pets but do require owners to be diligent with the rules and "baby proof" their living area as it is like having a 3 year old child at times. They are very social animals and get along with other animals, especially if they have grown up with them. They can be trained to perform many “tricks” or tasks. They are even being used to find truffles, as drug sniffing animals, and as assistance animals in some cases. Potbellies are naturally clean animals if they are allowed to be so. They only roll in mud to keep cool as they only sweat through their nose. If your potbelly is kept inside or is given a kid’s play pool with clean water they will be just as happy. They want to keep their sleeping and living areas clean, so they will usually find an out of the way area to use the bathroom.

As many of you know I have Wilbur & Fern. I was cited this week by Animal Control for having them and given a warning and told I had to get rid of them within 30 days. These are not just pets but are part of my family. We are devastated at the mere thought of having to rehome them. Due to the intelligence of the Potbelly, the grieve & often when separated from their owners don't survive because they grieve themselves to death.

Signing Petition to amend Ordinance 952, which was originally adopted in 1952 in the spirit of the breeder pig. Amendment to allow domesticated potbellies as pets within city limits of Jonesboro.