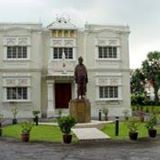 Save The Vivekananda Ashrama

We, the undersigned protest, object, and the proposed material change in the development and use of the building known as: