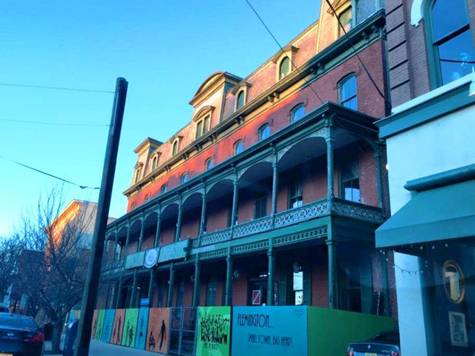 Save the Union Hotel in Flemington NJ

(This is FREE! You do not have to make any donation after you initially sign it)

They want to save our "dying town" by demolishing 4 of our beautiful Historical Buildings and replace them with ones that look like "big city" not a small Victorian town. One is The Union Hotel on Main St. in Flemington, NJ. This Hotel was used by Prosecutors & News people during the Charles Lindbergh Baby Kidnapping case, which was held at the Courthouse directly across from it. "The Trial of the Century" as it was known in 1935.

The Hotel is Grand & was a busy gathering place through the years. Unfortunately it has been neglected & is now considered too expensive to "restore", "too far gone". It is said that the Hotel Building to remain standing would "ruin the Vision" of the new developer Mr. Jack Cust, who has said all he hears is there's nothing to do in Flemington.

Our town has gotten rid of (for lack of a better term) 6 movie theaters, a bowling alley, a roller rink, an historical Fairgrounds & Racetrack all replaced by "retail stores","strip malls", "banks" ,"big box", "drug store's", "medical & law offices" & many, many buildings that are already filled with empty spaces and the people who want to "redevelop" wonder why people have nothing to do here!

We would like to see the Hotel remain standing and restored to it's former glory. It would be an attraction! At minimum save the facade of our Main Street! We do have a successful repurposed historical building "Stangl Pottery" which was saved not demolished & is a lively part of town again. Another building on our Main Street I watched taken down piece by piece & rebuilt NEW, but exactly the same! It's possible! Please sign this petition to Save the Union Hotel, our History, Beauty, & Small town charm. There is another way to redevelop the area without destroying it first. Once it's gone there is no returning. I believe there is a way! Join us!