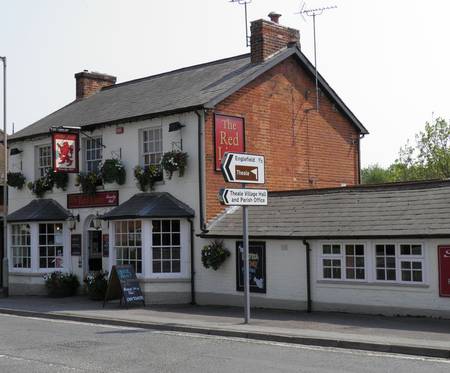 Save The Red Lion, Theale

The Red Lion is a historic Public House situated in a Conservation Area along Theale High Street. The Pub offers the last traditional skittle alley in the surrounding area and has been an important meeting place since the mid 19th Century.

This Committee's petition objects to the closure of the Pub and demolition of the skittle alley, which would represent a serious blow to a local community that is well known for its variety of coaching inns.

We, the undersigned, would like to see this village amenity retained as a community asset, and not lost to the proposed over-development of the site.

More detailed reasons for the objection may be found below:

1. The closure of the Pub contradicts many aspects of West Berkshire Council's robust pro-pub planning policies (see Supplementary Planning Guidance No. 19). In particular:

a) The applicant's viability study does not reference any trading figures for the last tenancy of the Pub, and is based on many assumptions rather than facts.

b) The Pub, skittle alley and function room contributed to the distinctive character of Theale village, and the location was featured in CAMRA's Good Beer Guide.

c) The Pub was popular with local residents, and workers from the nearby business parks, and represented a unique offering compared to the other pubs of Theale.

d) The Pub was not sold at a realistic price, and less than 6 months after it was last marketed.

a) Would have an unacceptable impact on the character of the Conservation Area.

b) Would have a detrimental effect on the residents of the Meadow Way properties to the rear of the site, and 7 Church Street.

c) Does not offer realistic parking to cater for the proposed 8 flats plus visitors. The applicant claims incorrectly that the roads around the site are unrestricted, when in fact they are permit-controlled / otherwise restricted.