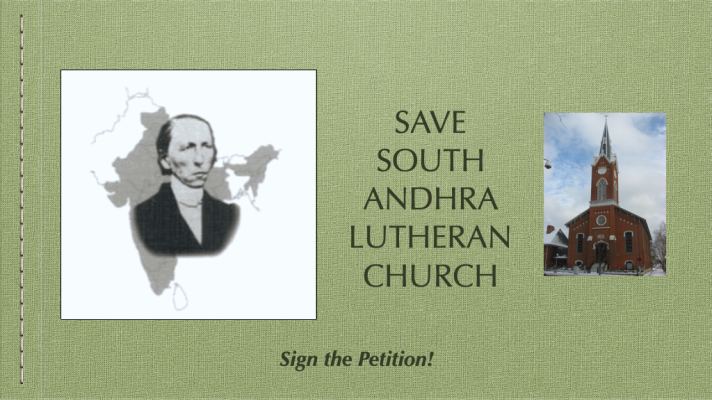 SAVE THE PROPERTIES OF SOUTH ANDHRA LUTHERAN CHURCH

1009 people have signed this petition. Add your name now!

The South Andhra Lutheran Church(SALC) Regd at Nellore District of Andhra Pradesh Regd.no 6/1954 having thousand crores of properties in Nellore, Kadapa, Chittor districts of Andhra Pradesh and in the Chennai city of Tamilnadu State.

The South Andhra Lutheran Church (SALC) was founded by prov st.George August Mylius, a German Missionary in the year 1885 and flourished under the able vision of American Missionaries have not only established SALC to spread the Gospel of christ but also have established schools, orphanage homes, skill development centres and hospitals with a vision to edify the christian community in India.Missionaries and Previous leaders of SALC with a great vision and intension to help the christian community, have procured huge number of properties that worth crores of rupees.

Till 2001 things in SALC were smoother.Later with the emergence of some non-Doctrine people as lay leaders, things started getting worse.These lay leaders have divided the church into two groups and running their self declared parallel administrations illegally on one Regd. number till date making much confusion among church members. From the past 22 years, these so called leaders have been indulged in activities that destroy ethics, credentials, the structure and democratic election system of the church.

The two groups sold crores of church lands illegally. This could be due to their greediness for sinful money, they have sold nearly 70% of SALC Properties in the last 22 years.In this multi crore illegal land transactions, the money that was not remitted to church accounts is lion's share.This has made the church a borrower. Many of those belonging to the original doctrine of South Andhra Lutheran Church who were crucified as membership defaulters and are fighting against the illegal sale of church properties.

we demand all the pastors and all the members of this doctrine to act on the below mentioned issues and resolve them at the earliest.

Sign my petition and request all the pastors and South Andhra Lutheran Church Doctrinal members to act with immediate measures for the above mentioned demands which is to re-establish constitutional elective administrative body and to bring back the properties that have been sold illegally.

Together we can do great things. Let us ensure that we bring back the past glory of SALC which was dedicated to serve the society by signing this petition.