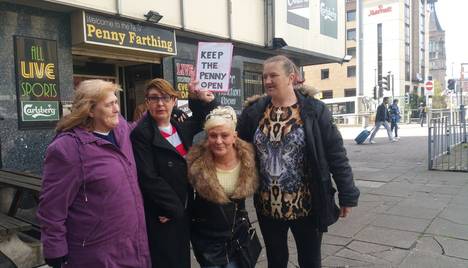 SAVE THE PENNY FARTHING - LIVERPOOL

SAVE THE PENNY FARTHING PUB

The penny farthing pub has featured in liverpool for 45 years. It has been home to many people living in and out of liverpool. With great staff and great atmosphere, this is definately one of the greatest places to go wether you just want one drink on your own, if you want to meet new people, or sing to your hearts content on karaoke.

People definately have the wrong impression of the penny farthing. There are definately NOT fights every day, strictly NO drugs allowed. Some of the people may not look or dress the best, but are some of the loveliest people you will find anywhere in liverpool.

The penny is a community in itself. The penny is the reason some people get up in the morning. Situated in the heart of the city centre, right next door to the ROYAL COURT THEATRE, which has just had millions of pounds worth of refurbishment. Many now stating the penny farthing is an eyesore!!!

The royal court have asked liverpool city council for £1.2mil to buy it out, due to it being an "eyesore", whilst not thinking about how many jobs will be lost and how it will destroy a loving community where regulars, staff, and friends class themselves as family.

If the council have a spare £1.2mil to lend out to get rid of a shabby looking pub, then why dont they have a spare £1.2mil to help the actual people of liverpool living on the streets?????? Why dont they use that £1.2mil to build a tower block of en suite rooms with a bed and a shower in, so the homeless have somewhere to get clean, and a decent nights sleep?! Or put mothers with new born babies instead of taking the babies off them and leaving the mothers to lose control and die in the streets?!

Please sign this petition to save the penny farthing, and save £1.2million pound of tax payers money being used for the wrong reasons. Is the penny farthing physically hurting anyone or causing any physical damage to the city?? NO... NEGLECT to the homeless, single mothers, the sick, and disabled, from the citys own council IS causing harm, even death...!!!!!