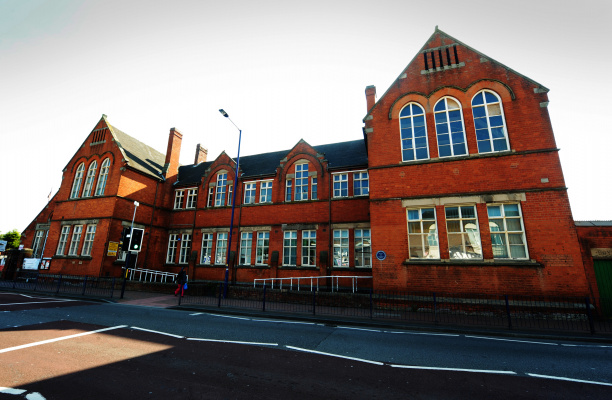 Save the Old School on Dudley Road, Wolverhampton

In 1861 only about 10% of poorer children were going to school, even those who attended very rarely did so beyond the age of ten. This was due to their families needing the income that their child would raise by sending them to work.

In 1870, largely due to the concerns that education in England was lagging behind countries like Germany and USA, the Government passed the Education Act 1870 which made education compulsory.

Elected school boards were set up throughout the country in order to oversee local schools, to build and run new schools and pay the school fees for poorer children.

Wolverhampton School Board was established 28th November 1870, with Henry Fowler the first Chairman. The board ordered a series of schools to be built, the first Central Schools in Willenhall (now demolished), the second being Dudley Road School built in 1875

School in those days meant classes of upto 80 students. All children were taught to read and write, but boys also studied practical subjects such as woodwork and mathematics.

An important part of Victorian education was moral and religious teaching, and the schools maintained very strict discipline.

The school was renamed several times during its lifespan, until its closure in 1986. Many local residents in Blakenhall, All Saints and Graisley, who were born in 1970’s or earlier will share fond memories of the school.

In 2013, Blakenhall Action Community Forum (Established 2002) took over the management of The Old School with the aim of restoring it to its former glory as a community hub.

Nowadays, the School is affectionately known as ‘The Old School’ it is a Grade II Listed Building and still remains a backbone of the local community.

The school hosts sessions for around 30 local community groups that are attended by hundreds of people each week from different faith and cultural communities. It also hosts many local events throughout the year, providing well needed space, equipment and facilities for a wide variety of uses.

We need your HELP!

The Willenhall community was devastated when the council decided to demolish the Central Schools site even though at the time, the site was not being used.

Here at Dudley Road, The Old School is currently under threat of being closed by Wolverhampton City Council and we use the site everyday!

Council bosses have given BACF, all of its tenants and users just 28 days to vacate the building citing concerns over fire safety. The concerns that they have raised we feel are unjustified and recently we have made several steps to improve the safety of the site.

BACF is launching a petition over the closure.

We need your support to keep The Old School open.