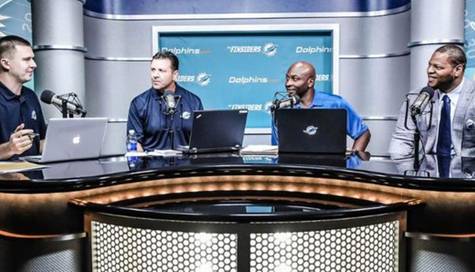 2726 people have signed this petition. Add your name now!

On March 12, it was announced that the Miami Dolphins would be bringing an end to The Finsiders, a production that goes way beyond what some call a radio show. Besides them being on the air during the week from 4 - 7 PM, they also are on television for their second hour. Additionally, they produce and air content on the Miami Dolphins website on a daily basis.

However, it doesn't stop there. The relationships that have been cultivated by host Greg Likens along with his crew members - Tristin Jones, Sam Madison, OJ McDuffie, Troy Stradford and others - have been wide-ranging. Whether it's in person, on social media platforms or in private conversations, you will be hard pressed to find anyone else that best represents the Miami Dolphins organization.

These people are not just another number in the financial department's books. They are not just a tally mark on the year-end report. Yes, we understand that there are financial reasons behind this as well as contractual reasons. We understand that the radio rights to the Miami Dolphins will be headed in a different direction. But, that doesn't mean that these talented people should be simply let go.

When you have people who are as talented as Greg, Tristin, Sam, Troy and others, you find a way to make it work and fit them in. On the football field, you find ways to fit talent in and make it work. It should be the same behind the scenes as well.

Miami Dolphins owner Stephen Ross stated several months ago that he believes the Dolphins are best in class in everything they do off the field. Permanently getting rid of The Finsiders and its crew would put a large dent in that statement.

With the creative minds that are headquartered in Davie, there are ways that you can make this program work. This includes a daily podcast, fan interaction and columns on the website, a behind-the-scenes look throughout the week and more. Sure, there won't be any radio broadcasts anymore but there are just as many people who have turned to the podcast route to get their fix of information.

We are asking you that you keep one of the gems of the Miami Dolphins - The Finsiders Crew. Former host Jesse Agler made it what it is today and Greg has done a fantastic job of carrying the torch. It would be a shame to see if come to a permanent end.