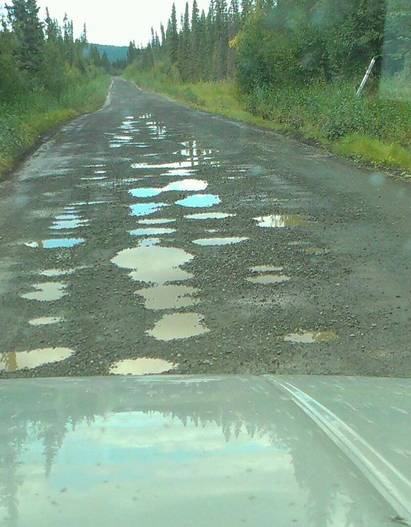 Save the Chitina DOT Station

The proposed FY 2017 budget proposal contains drastic cuts across the board including DOT. As a result DOT informs that at the proposed funding levels they would permanently close 6 DOT stations including the Chitina camp. The employees will be terminated and the equipment sold. That means another camp (Tazlina) will have to pick up an extra 120 miles of road and two airports on top of their own current work load.

The result would be very poor and sporadic service for the Edgerton and McCarthy road, at best. At worst, those roads would get no maintenance at all.

We strongly urge the reinstatement of funding sufficient to retain the Chitina DOT station.

We all understand the harsh realities of the current fiscal environment and realize that reductions in spending will have to be made.

It's easy to think that the McCarthy Road serves only a handful of year-round residents and that money spent on that road could serve the interests of a greater number of people elsewhere.

But this is no Road to Nowhere. The Edgerton and McCarthy Roads serve the needs of thousands of Alaskans and visiting tourists every year.

The Copper River at Chitina is one of the few spots in the state for subsistence dip netting of Alaskan salmon. Hundreds of Alaskans travel the Edgerton every summer to put fish in their freezer. The Edgerton, especially close to Chitina, is prone to frost heaving and with a drop in maintenance or total neglect, this stretch of road could quickly become very hazardous.

The McCarthy Road is the only corridor into the heart of Wrangell-St. Elias National Park - the largest in the national park system. Every summer thousands of tourists travel the road to visit McCarthy and Kennicott where they spend hundreds of thousands of dollars that supports dozens of local businesses such as hotels, B&Bs, guide services, air taxi and flightsee providers and other tourism related enterprises.

If maintenance on the McCarthy Road declines or is dropped completely then the road will rapidly decline to the point where it is borderline untraversable and tourism in the area, which has been on the rise, will surely go into a decline as word spreads online that the McCarthy Road is a horror show.

Last summer saw reduced maintenance and heavy rains later in the summer. In a matter of 3-4 weeks the road deteriorated to such an extent that it reminded many long-time residents of the road before DOT did any maintenance at all.

Over the last several years the state has done extensive work on the road, straightening winding sections, widening blind curves on dangerous bluffs and clearing brush along the side of the road to improve sight-lines. Two summers ago the first 17 miles were chip sealed up to the Kuskulana bridge. All of this work has made the McCarthy road safer.

To walk away from that investment of time, energy and money would be irresponsible. If the chip sealed section is not maintained it will become more hazardous then if it had been left as gravel.

DOT has stated that summer maintenance is covered by federal funds and so will not be impacted. This is misleading as those federal funds cover hole patching which does little for the McCarthy Road. It's not just a matter of funding but of workload. It doesn't matter who is paying for it if the DOT station doesn't have the men, time and equipment to do the work. If service will decrease as a result of the closure what does that mean if the McCarthy Road only got graded twice last summer?

It is clear that the financial future of our state is not in resource extraction alone and we must find new sources of revenue. We urge the legislature to acknowledge the importance of this vital corridor and the role it plays in the tourism that is a vital element of the Alaskan economy and is destined to be more so in the future.

Now is the time to invest in the qualities of Alaska that will endure when the oil and gas have run out - the hunting, fishing, hiking, boating and other ways that Alaskans and visitors alike enjoy this great land.

The state needs to support and invest in the tourism industry not abandon it.

The men at the Chitina DOT station have worked very hard to keep these roads serviceable and safe and the people who live here and travel these roads owe them a debt of gratitude. And they deserve the state's support as well.

We strongly urge the reinstatement of funding sufficient to retain the Chitina DOT station.

Thank you for your consideration.