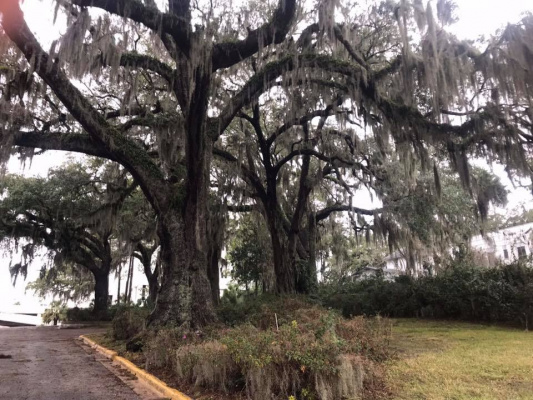 Save the Cascades oaks

Our intrepid tree protector, Ann Bidlingmaier, has alerted us that a magnificent grove of live oaks is hidden away from view from most passing traffic on the site the City proposes to sell to a private developer. The plans the City has publicized suggest the total elimination of this treasure. This grove of large live oak trees is on an interior lot, occupied only by them since well back into the 19th* century and possibly all the way back to the selection of Tallahassee as the capital for the new Florida Territory. This lot is designated on the original City Plan drawn up in 1824; today they are within the block bounded by Gaines on the north, Gadsden on the east, Bloxham on the south, and Calhoun on the west. The grove is in the center of the present day block, and largely invisible by passing vehicle traffic. We suspect that City Commissioners are no more aware this fabulous grove even exists than were any of us, prior to Ann’s discovery.

Ann alerted a handful of citizens, and led them on a tour of the site earlier this month. All were stunned that this spectacular grove existed and had been overlooked in the long run-up to the City selling the site to a private developer. Included on her tour was a team of arborists who have inspected, measured, and photographed the trees. They have found all to be in vigorous good health.

It is our understanding the City has acquired this property (or is about to acquire it) through a swap with the State of Florida. In doing so, the City has continued public ownership of an absolute treasure of nature. While the lot on which these oaks are growing is largely undeveloped, the State did pave surface parking on the southernmost portion while carefully preserving and protecting all the live oaks. This is the condition of the grove on the City taking possession.

This incredible grove of live oaks is iconic of our city and Leon County. Their destruction, now, at the whim of a private for-profit business is absolutely unacceptable. It is not safeguarding public assets nor protecting the public interest. Further, disposal of this public asset into private ownership on the theory this publically owned land is now “surplus” is hardly certain to withstand judicial scrutiny.

As a City Commission responsible for protecting municipality owned natural assets, we feel you are obliged to protect this treasure. A possible solution without disrupting the development you have so eagerly sponsored is to reconfigure the parcel you intend to dispose of, either retaining the grove or requiring its perpetual preservation. In exchange, a tract of roughly equal size to the grove could be substituted. The developer would then be free to fully exploit the unrestricted substitute parcel. But to sacrifice this public treasure for private profit is a breach of your responsibility to the public.

We write this letter to alert you to the potential destruction of an irreplaceable publicly owned natural asset. As stated earlier, we believe its presence has simply been overlooked. We ask you to inspect the site and then take steps to see that it is protected and preserved. You cannot allow today’s, and tomorrow’s, citizens to be stripped of this spectacular public heritage.