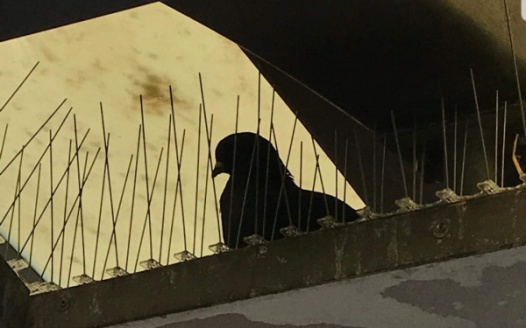 Save the Birds, Remove the Spurs

Background: Where do the birds dwelling in the escalator come from?

With the kick-start of the central market redevelopment project in 2017, the bird spikes are installed and filled all over the exterior wall of the central market, wild birds mainly pigeons and doves as the indigenous inhabitants are being forced to leave and resettle along the Central-Mid-Levels Escalator and rest themselves on the internal beam of the walkway system.

While struggling to scrape by with this bare resource, the birds are further pushed out of a deplorable living by the recent installation of bird spikes along the ceiling of the walkway system which again forcing the birds leaving to NOWHERE.

SPCA has already received reports of birds getting trapped in the panel of bird spikes.

What are bird spikes and how are they jeopardizing the wild birds?

Without any pre-arrangement to make transient place for the birds to rest, the animals were left without choice but to make home in the inside ceiling of the escalator which operates in the neighbourhood.

They were so desperate to find a place for rest that they hovered over the forbidden area and sometimes fell into the maze of spikes.

Who are the parties responsible for the set up of spikes?

The district councilors alleged that they had received complaints from local residents about the birds causing nuisance to the area.

Government funding was approved for the installation of spikes to be carried out by property management companies working on contract.

We, Hong Kong Pigeon and Dove Rescue, are now pleading to all of you to make request to the district councilors and property management companies involved for the following:

1.Stop driving them out of the community

They are part of the city and have the right of abode! The intelligent pigeons are symbols of peace and love. In the celebration of return of sovereign rights to the Chinese government, the Hong Kong government has released 10,000 pigeons to herald a smooth transition of sovereignty.

The HK government has played a major role in ushering a population of wild pigeons into the city.

2.To remove the spikes immediately

Bird spikes can definitely cause physical harm to birds. As commented by SPCA on recent incidents which reported trapping of birds among spikes, they have made clear that birds can easily fall into the maze of spikes, yet difficult to get out by themselves. Also, birds can get injured while landing accidentally on the spikes

The walkway system serves to provide a convenience for the human activities but is the only place in the area to call home for the birds.

Please return to them this teeny weeny amount of space we have snatched from the wildlife.

3.Pigeons rarely catch bird flu virus and are not the prime carrier of the disease.

There have been various medical studies to confirm that columbidae are not susceptible to bird flu virus.

They rarely catch the disease nor spread it to other birds or species.

That is to say, it would be very difficult to pick up the virus by spending time in a park with flock of pigeons, let alone just walking past by.

Decrying pigeons as the culprit of bird flu virus is simply unfair to the animals.