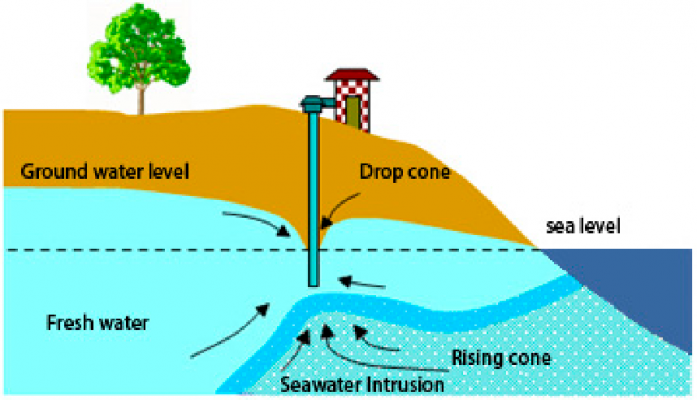 Saltwater intrusion occurs in many coastal aquifers around us and is affecting Florida’s waterways and environmental habitats. The Biscayne Aquifer provides as much as ninety percent of South Florida’s water. As the seas rise and saltwater pressure increases, the freshwater source is put at risk. Few know this is a problem but it continues to harm our surroundings. The Central and South Florida project should be filling the canals faster and familiarizing the public on their water usage. The C&SF Project has three main components. First, it establishes a levee through the Everglades, blocking sheet flow so that lands east would be protected from direct Everglades flooding. Second, the C&SF Project designed a large area of northern Everglades to be managed for agriculture called the Everglades Agricultural Area or the EAA. The EAA encompasses about 27% of the historic Everglades. Third, water conservation became the first designated use for the remaining Everglades between the EAA and Everglades National Park. Canal systems were built to help drain the Everglades and Lake Okeechobee and prevent flooding. These canals are now affected. We periodically tested water at a variety of locations that lead to the intercoastal and retested the water along the same route to prove that saltwater intrusion is a continuous problem in our local community.

We decided to do this project because our freshwater is released through these canals which causes saltwater intrusion. When the water level in a canal gets too low, saltwater starts to sleep inland. Eventually, the saltwater will make it far enough inland to containment the freshwater supply. Without a freshwater supply, the community becomes endangered. We would need to find other sources, which are already scarce. This problem needs to end with help from the government and local citizens.