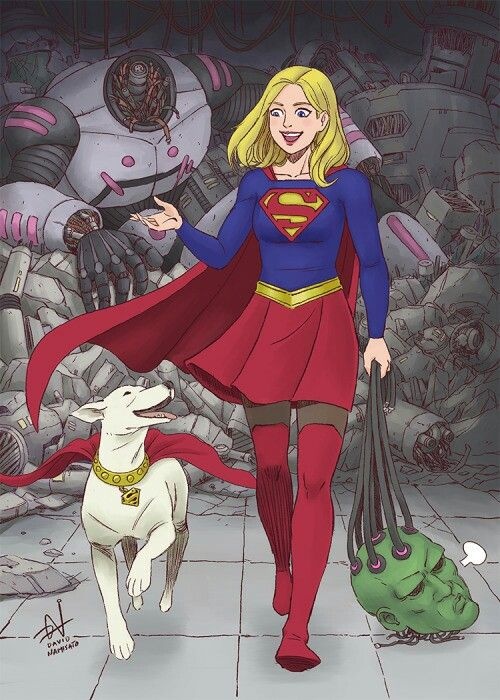 DC Cancels Supergirl With Issue 42 By NICOLE DRUM - February 15, 2020 02:30 pm EST DC's current Supergirl comic book run is coming to an end. According to the recently-released May 2020 solicitations (via Newsarama), Supergirl will end its run with issue #42. The issue is expected on May 27. News of the title's cancellation comes just a few months after writer Jody Houser and artist Rachael Stott kicked off their run on the Supergirl title with that issue, #37, having hit shelves in December. Their current run has seen Supergirl's story tie-in with Batman/Superman's "The Infected" event following the Girl of Steel's being infected by a tainted Batarang that was meant for Superman. The current Supergirl arc, "I'm The Bad Guy" has seen the Girl of Steel turn into something of an unstoppable villain. In the most recent issue, this week's Supergirl #39, even Wonder Woman is unable to stop the infected Supergirl who is bent on "saving" Earth through her warped, brutal measures. Unfortunately, Kara's actions have gotten the attention of the U.S. Military which dispatches technology created by Lex Luthor to put Supergirl down. They fail, but now Supergirl's on their radar and, according to the solicitation of that final issue they're definitely still coming for her even though it seems that Kara may have somehow get back to herself before that final showdown. You can check it out below. Deemed a threat by the U.S. military, Supergirl is now a wanted villain! General Corvid has come for our hero—and she won’t give up until Kara’s gone for good. Meanwhile, the superstorm rages stronger than ever, while hundreds remain helpless against it. Can Supergirl prove that she’s the hero the people once believed her to be? Or will she let everyone down—including herself? Find out in the pulse-pounding series conclusion!

For fans of the Supergirl title, this cancellation may come as a bit of a surprise, but it also may not feel entirely unexpected. The series has spent most of its recent arcs fitting Kara into other major storylines going down in other books, including a brief connection to "Event: Leviathan" which followed Supergirl's own battles with Rogol Zaar and her quest to find out the truth about the destruction of Krypton. That story at least offered a deeper exploration of Kara as a character, something that the tie-ins to "Event: Leviathan" and now "The Infected" have arguably largely not touched on.

At this point, it is unclear if a new Supergirl title is coming to replace the one that is ending.

Supergirl #42, written by Jody Houser with art by Rachael Stott, covers by Carmine Di Giandomenico and Derrick Chew, is expected on sale May 27.

Supergirl has never been more popular, with her own live-action TV series catapulting Kara Danvers to mainstream recognition, and placing her right alongside Justice League regulars like Flash and Green Arrow.

One of the most glorious things about Supergirl is that catching up on her comics is comparatively straightforward compared to her little cousin, Superman.

New readers have plenty of clear starting places, and the TV show has encouraged DC to begin releasing more collected editions of Supergirl comics, such as the bizarre yet fun 90’s Peter David run or Supergirl and the Legion of Superheroes by Mark Waid.

For the most part, if you’re brand new to the character from Supergirl on TV, and just want to know if you even like Supergirl comics, I recommend checking out the New 52 Supergirl or DC Rebirth Supergirl portions of the guide below.

For everyone else who wants the whole history, you’ll find a Superhero chronology and timeline of collected comics below. Enjoy!

While you don’t necessarily need to start with Supergirl in the Silver Age if you’re coming to the character fresh in the 2000’s, it’s a very fun read, and fascinating how much of Supergirl’s true origin carries through to her appearances in live action media.

Supergirl in the 1980’s Through Crisis!

Originally published in 1982, with stories by Paul Kupperberg and Carmine Infantino. Supergirl goes to college!

Collects: Daring Adventures of Supergirl #1 to #12

Collects: Daring Adventures of Supergirl #13 to #23

Crisis is DC’s mega event of 1985 that alters the DC Universe continuity forever. Supergirl is particularly impacted, and if you don’t want to actually read the whole event, it’s worth at least look into what happens to Supergirl during Crisis.

Collects: Crisis on Infinite Earths #1 to #12

Peter David and Gary Frank’s 1990’s run on Supergirl is remarkably weird. I first came across the insanity of the plot during DC’s Convergence, and it was easily the most “Wait, this actually happened?” moment of the entire event.

Nonetheless, Supergirl also goes down as one of Peter David’s most interesting runs, which is saying something given David’s fantastic work on Marvel’s Incredible Hulk and X-Factor.

Worth noting that the third chapter in Peter David’s Supergirl run includes a DC One Million tie-in, which occurs in connection with the Grant Morrison event.

Supergirl Reborn in the DCU of the 2000’s

The Jeph Loeb and Michael Turner relaunch of Supergirl in the DC Universe, complete with Apokolips and Darkseid appearances! You may also recognize this highly entertaining Supergirl rejuvenation from the DC Animated Movie by the name Batman / Superman: Apocalypse.

Supergirl Vol. 1: The Girl of Steel

Supergirl and the Legion of Super-Heroes Vol. 3: Strange Visitor from Another Century

The third volume of Mark Waid’ s run on The Legion of Superheroes brings Supergirl fully into the fold, and carries the series title Supergirl and The Legion of Super-Heroes moving forward. Since these all occur in the distant future, you can read through the Legion series all at once here.

Supergirl and the Legion of Super-Heroes Vol. 4: Adult Education

Collects: Supergirl And The Legion Of Super-Heroes #20-25

Supergirl and the Legion of Super-Heroes, Vol. 5: The Dominator War

Collects: Supergirl And The Legion Of Super-Heroes #26-30

Supergirl & the Legion of Super Heroes: The Quest for Cosmic Boy

Collects: Supergirl And The Legion Of Super-Heroes #31 to 36

Supergirl: Way of the World

5 issue miniseries from Jimmy Palmiotti and Justin Grey, with Phil Noto on art.

Supergirl: Who is Superwoman?

Supergirl #34 marks the beginning of Sterling Gates run on the character, and also ties into the New Krypton arc of Superman crossovers led by Geoff Johns and James Robinson in the late 2000’s.

Supergirl: Death and the Family

Supergirl gets another relaunched series, this time as part of DC’s New 52. If you want to see how Supergirl fits into context of the entire DC Universe, you can check out Comic Book Herald’s New 52 reading order.

Supergirl, Vol. 2: Girl in the World

The third New 52 volume of Supergirl comics includes tie-ins for the Superman: H’el on Earth crossover event. You can find a full reading order below:

Supergirl Vol. 4: Out of the Past

To see how Supergirl’s Rebirth comics fit in with the rest of the DC Universe, check out Comic Book Herald’s DC Rebirth reading order.

All Ages, Outside Continuity

All ages graphic novel, too good to leave off any Supergirl list!