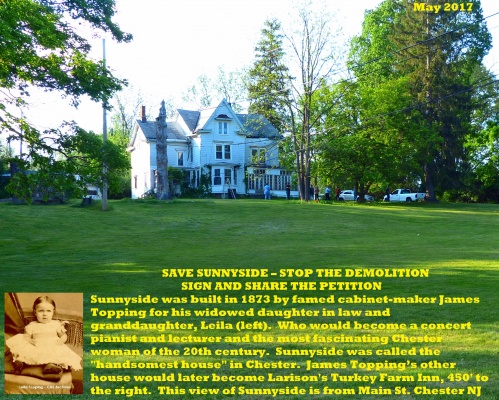 Please sign and share this petition to help save Sunnyside and Larison's Turkey Farm Inn. James Topping, the renowned cabinet maker, built Sunnyside in 1873 for his widowed daughter-in-law and grandchild, Leila. Sunnyside is the companion house to what would later become Larison’s Turkey Farm Inn, a Chester landmark. Bolstered by the revenue from two nearby mines and Topping’s craftsmanship, Sunnyside would become the “handsomest house” in Chester NJ at the turn of the century.

James Topping bought the Isaac Corwin House in 1829 and lived there until his death in 1874 at the ripe old age of 94. He greatly expanded and embellished the house with his woodworking expertise. In 1940, the "Isaac Corwin House" (its historic name) was one of only three buildings in Chester to be included in the Historic American Buildings Survey in recognition of its architectural and historic significance. In 1945, Willis Larison bought the house and property from the Topping heirs and converted the house to a restaurant, The Turkey Farm Inn. Willis retired in 1974 and sold the Turkey Farm to restauranteur Arthur McGreevy. The McGreevy's operated the restaurant until 2002. The property was then sold to Turkey Farm Acquisitions LLC who have proposed a development plan that would demolish both historic buildings.

Help the Chester Historical Society Board stop the demolition of Sunnyside and Larison's Turkey Farm Inn. Help us convince the Chester Borough Land Use Board and Governing Body to reject the application to demolish them. They should not be demolished, but conserved and adaptively reused as many other Chester Main Street historic homes have been, to offices, restaurants, and shops. Under all four considerations of the Chester Borough historic preservation architectural review process, Sunnyside and Larison's Turkey Farm Inn qualifies for preservation.

The complete story of Sunnyside is available on the Chester Historical Society’s website at http://www.historicchesternj.com/