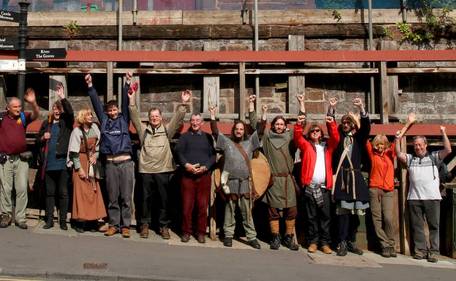 Viking Chester group is encouraging people to sign a petition to save St Olave's Church. The campaign has been launched to persuade Cheshire West and Chester Council to convert an 11th century Scandinavian church into a Viking Heritage Centre.

The present church building dates from 1611. In 1841 the parish of St Olave's was united with that of St Michael’s. It was declared redundant by the Church of England on October 3, 1972.

Viking Chester is keen to find a new future for the building as a ‘Viking Heritage Centre’. The group is keen to work with interested parties across Chester and beyond to find a solution for the building including Big Heritage, The Centre for the Study of Viking Age at University of Nottingham, Cheshire West Museum Service, two groups from Norway and anyone else who is interested in saving the building. The public can show their support by signing the online petition or by visiting St John's Church by the amphitheater in Chester and signing the paper-based version of the petition.

To get more actively involved in the group and the campaign please email us at hello@vikingchester.com Viking Chester is currently working up an outline business plan for the Building and hope to have meaningful discussions with the local authority this autumn. Please check out website at www.vikingchester.com