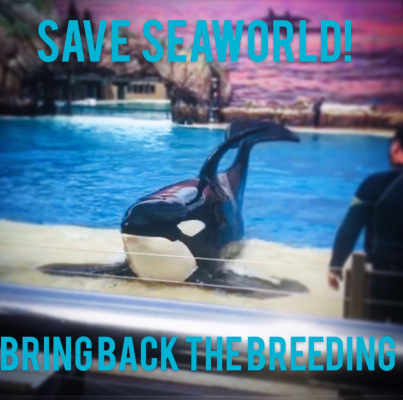 SeaWorld is a company that has been around for 50+ years. It is a world leader in rescuing and rehabilitating animals and has been deemed to have the best care for marine mammals. In 2013, a popular documentary titled "Blackfish" was released and caused SeaWorld's attendance to drop significantly. It led people to believe that orcas were being held in tiny tanks equivalent to the size of a bath tub and that SeaWorld would drug their whales. Since then, the park has had backlash from companies like PETA and the Humane Society of Animals. A new "documentary" was also released and was called "Whistle Blower." SeaWorld has rescued and released 22,000 injured or ill animals and donated $2.5 million towards wild life conservation and is supported by NOAA. Before places like SeaWorld, people were so scared of orcas they were killing them on sight. Since the 1960's, SeaWorld has inspired millions to protect the ocean and it's animals. Backstage, the trainers are able to ask the animals take breath samples and other stuff that'll help them with research they can send to scientists to study. In 2016, SeaWorld decided to make the sad decision of ending the orca breeding program. This killed millions of dreams for people to work with killer whales, and quite frankly, makes no sense! Instead of ending the breeding program, SeaWorld should end it's Artificial Insemination program so the orcas can mate naturally. It is a natural instinct for these animals to mate, so by ending the breeding program they are preventing them from a natural right. By bringing back the breeding program and ending Artificial Insemination program, SeaWorld can escape public outcry of them "raping orcas" and the females and males no longer have to be separated from each other in Orlando. The Blackfish effect has ended, and now, SeaWorld's parks are starting to be full again! By signing this petition, you are helping me bring back the breeding program. So please do!