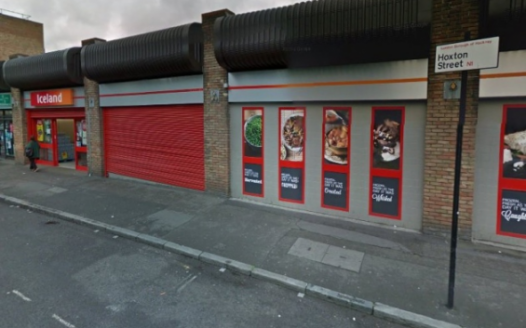 Save Our Local Iceland Supermarket in Hoxton

Please support the campaign to keep our Iceland supermarket in Hoxton Street open by signing this petition.

Please sign this petition to oppose the possible loss of our local Iceland supermarket unit at 209-223 Hoxton Street. The owner of the building proposes the demolition of the existing 2 storey building comprising a ground floor Iceland supermarket and pharmacy, and ancillary office space at first floor level, and the redevelopment of the site to provide two A1 retail units and 25 private rented sector residential units within a part-four part-five storey building. We are concerned that any demolition of this building will cause considerable disruption to Hoxton Market, local businesses and local residents for an extended period of time, as well as possible loss of daylight and sunlight to other properties in the area after completion.

From the information that we received, it has been confirmed that the proposed retail layout has been configured according to Iceland’s maintained operating requirements, however, it is not guaranteed that Iceland supermarket would operate from the site in the future.

Iceland Supermarket is vital and heavily used by the Hoxton residents and the people in the neighbouring areas. Closing it down will deprive the residents of their much loved supermarket for at least for the period of redevelopment, We don’t yet know whether an alternative arrangement has been made by Iceland to operate from another premises in the area while the redevelopment is going on.

Mayor Phil Glanville and the local councillors are backing residents in their campaign to keep the only large affordable supermarket in the area open.

We say to Iceland – discuss your plans with us – don’t leave us in the dark. Come up with a solution which means we continue to have an Iceland supermarket in Hoxton.