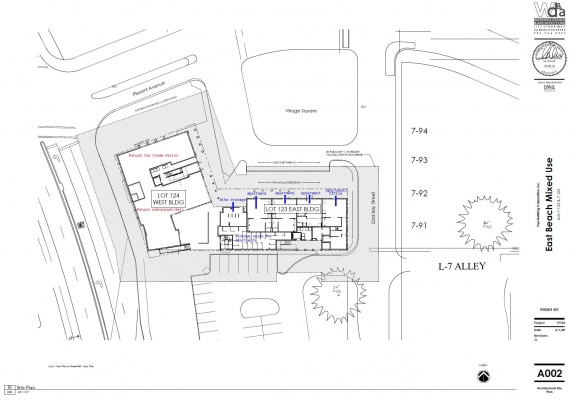 Save our East Beach Village Square from More Apartments!

Please sign this petition to stop the construction of apartments on Lot 123 in our future Village Square before its too late. These spaces were planned to be retail and should be retail. By changing them to residential, the fabric of the Village Square will be destroyed by leaving only two small retail spaces on Lot 124.

At the EB annual meeting on May 24, 2022, Jeff Wells, fellow neighbor, architect and former chair of the EB economic development committee, revealed that our dream for the Village Square is not being built as planned. Of the approximately 10,000 square feet of planned first floor retail in the two Village Square buildings under construction, approximately half is to be built as first floor apartments, bike storage and storage units for the apartments. (See plan). By the way, this change in plan was not circulated or announced to the community. Hence, the uproar that followed by those in attendance.

In 2016, a revised plan was presented to the community that reduced and set the commercial and retail to 56,000 square feet.

In this plan, the Village Square (the site just north and south of Pleasant Avenue at Shore Drive currently under construction) included first floor retail of 21,000 square feet with 76 apartments above.

The current Village Square Apartments on the north side of Pleasant Avenue were supposed to have ground floor retail -- that space has been eliminated. The "triangle" site (current location of the Farmers Market) was slated for 7,000 square feet of retail on the first floor and 40 - 50 condos above -- retail space has been dropped and more housing is proposed instead of condos. The balance of the planned commercial space would be found in four liner buildings, which includes East Beach Veterinary Clinic, the commercial spaces along Pretty Lake Drive and some mixed-use buildings on Pleasant Avenue.

All of this is disappointing, however, there was still hope that we could get a decent Village Square for the neighborhood. A half-dozen small retail spaces and decent sized restaurant surrounding some well-designed public space would be a wonderful gathering place for the community and those beyond.

Take a look at the plan: Building 1 (Lot 124 on the corner of Pleasant Avenue and Shore Drive across from the new apartment building) is now planned to contain a 1,900 square foot ice cream shop and a 2,500 square foot restaurant or deli. Building 2 (Lot 123, adjacent to Lot 124) is now slated for four small apartments (600 - 1,000 square feet) and a slightly larger corner office, along with bike and regular storage for the apartments. These residential apartments and storage units are exactly the opposite of what should be facing the Village Square according to best planning practices. To create a successful Village Square, all spaces around the square should be retail.

After the meeting, 40-some signatures were collected from those at the meeting to stop the build-out of the apartments. We urge you to join us and sign the petition to stop this travesty to our Village Square from going forward.