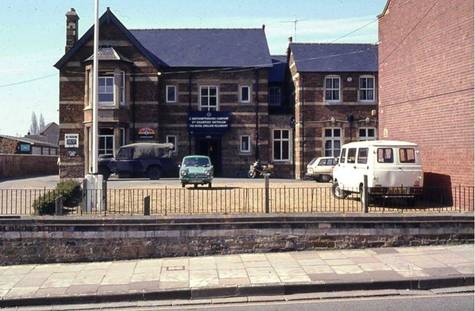 Save Our Drill Hall!

"We hereby ask that Wellingborough Borough Council ensures the safe keeping of The Drill Hall and that it remains part of any future development of the site."

The Drill Hall, or St Heliers as it was named in 1874, when Mrs Mary Ann Marriott is listed in the Whellan Directory as the occupant

In 1876, the Reverend James Ervine lived there and it is noted that his study window at St Heliers looked out upon the site for the [Congregational] church, as it was being built. While it appears to have been used as a manse at this date, it is not known whether it was built as such.

It is present on the First Edition Ordnance Survey map and on the Second Edition map is called St Heliers Hall. In the 1886 large scale map of the town, there are extensive gardens to the rear of the building and it appears to have been a fine private residence.

The former TA Centre according to the HER information the Drill Hall and garages behind were built in 1939, and opened by the Duchess of Gloucester in May of that year.
These buildings have now been demolished, leaving the original buildings associated with St Heliers.

They are built with the distinctive bands of ironstone and limestone that are seen elsewhere within the town. The Queens Hall Day Centre, immediately to the south, has similar stonework

Outline Planning Permission is being sought for Demolition and redevelopment as an Independent Living Unit, there are no formal designs for the proposed building

St Heliers should NOT be demolished, it should be kept and integrated in to the new development proposed for the High Street / Jacksons Lane area.

Thank you for supporting us.

Save Our Drill Hall