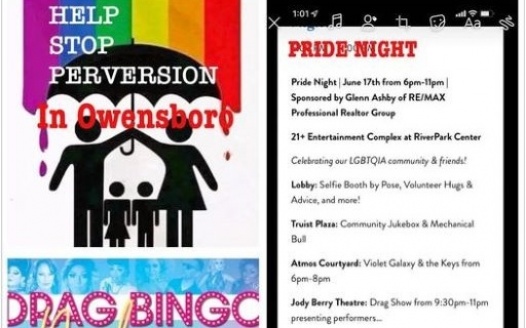 Save our Communities Reputation

On June 11,2022 the Owensboro Convention center hosted Drag Queen Bingo and on June 17, 2022 Riverpark Center hosted a drag show as part of the Pride celebration. Both the Convention Center and Riverpark Center are funded, in part by City and County taxes. We, the undersigned, object to our tax dollars being used to fund any organization that does not respect the reputation of our city or the values of it's citizens.

For as long as we can remember, Owensboro has had a stellar reputation for being a wonderful place to raise a family. It has long been a community known for it's kindness, decency, hospitality and Christian foundation. City/county funded facilities hosting events where men dress in women's clothing and dance obscenely for the pleasure of others is disrespectful to women, and to our citizens in general, not to mention offensive.

The Riverpark Center will have received at the end of Fiscal Year 2022 over $350,000 from the City of Owensboro over the past 2 years and over $10,000 from Daviess County just this year.

Funding of facilities whose boards and Executive Directors are intent on harming this Cities reputation and demeaning it's citizen's, especially the female population runs counter to what we believe is the responsibility of the City Commission, the County Commission, the Board of Directors of the Riverpark Center and the Oak View Group (Owensboro Convention Center). We expect any future funding to be withheld until assurances are received from the Riverpark Board, it’s Executive Director, and management at the Convention Center that the reputation of this wonderful city and its Christian Citizen's will be respected. If this City and County Commission cannot respect the community and people it serves we will endeavor to find representatives who will.