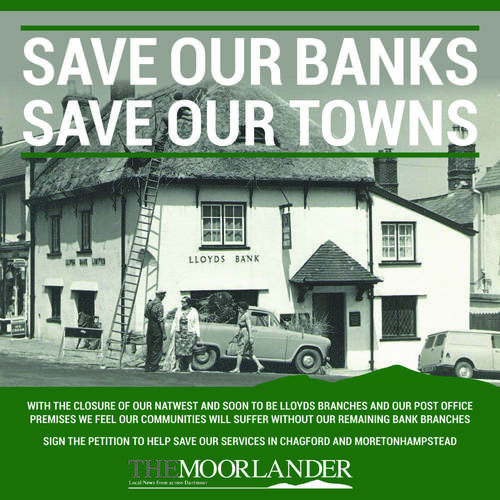 Save our Banks, Save our Towns

Moretonhampstead and Chagford banks to close.

The retreat of banks from Britain's streets is in full flight – with Dartmoor suffering considerably at the hands of cost cutting.

Branches across the country are being axed at a rate never witnessed before as the big banking organisations seek to ruthlessly cut costs and push more people online.

In many instances, the closures are leaving villages and towns without a bank, forcing both residents and retailers to travel further afield to do their banking.

Communities that a year ago had a choice of banks have now become banking wastelands with only the local post office and the odd cash machine, where they still exist, providing locals with access to cash and basic services.

Ashburton lost their Natwest branch in 2015, and in November of last year their last bank – Lloyds – shut its doors. The Post Office has stepped in to fill the void as best as it can.

Okehampton’s HSBC closed in February of last year – with the nearest alternative being Tavistock, 16 miles away.

Chagford’s Natwest shut in February 2015 – with the Bovey Tracey branch of the same bank closing in the following September. The Lloyds bank in South Brent has also closed and the branches in Chagford and Moretonhampstead are due to close on 24th May of this year.

It’s not just the banking services, though. The Post Office in Chagford has also closed leaving a determined postmaster offering a couple of hours a few days a week in the village hall, and the Moretonhampstead Post Office is under threat of closure.

The Moorlander newspaper has launched a petition in order to allow people to voice their concerns over all the recent, and future, closures of our vital services. Hundreds of local people have already signed in the first 24 hours.