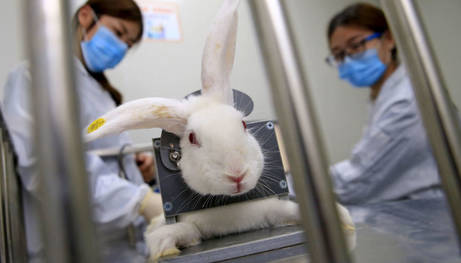 Every year, 26 million animals are used for scientific and commercial testing in the U.S. alone. They are locked inside cages in laboratories as they wait for the torturous procedure that will be performed on them. This activity is cruel and inhumane, as these animals, such as rats, rabbits, and cats, are force fed, deprived of food and water, have prolonged periods of physical restraint, and are constantly inflicted of pain. Sadly, animal testing is funded by the government, who spends $14.5 billion per year on animal experimentation, and the U.S. National Institutes of health, who spends $14 billion of its $31 billion annual budget on animal research. And surprisingly, even though there is a lot of funding for animal testing, it is not always safe as drugs that pass animal test may not work on humans because animals are very different from human beings. There are alternative methods to animals testing that are safer and less expensive. These alternative methods include studying cell cultures in a Petri dish, microdosing, using artificial skin, etc.

It is clear that animal testing needs to stop as it is very expensive, unnecessary, and torturous for animals. People can show their support by not buying products from companies that test on animals such as MAC Cosmetics, Pantene, Aveeno, Johnson & Johnson, Tide, and Windex. Instead, we should be supporting brands that don't test on animals such as Lush, Urban Decay, Bath and Body Works, and NYX.

If you believe that animal testing should be banned, sign this petition and together we can take action and stop this