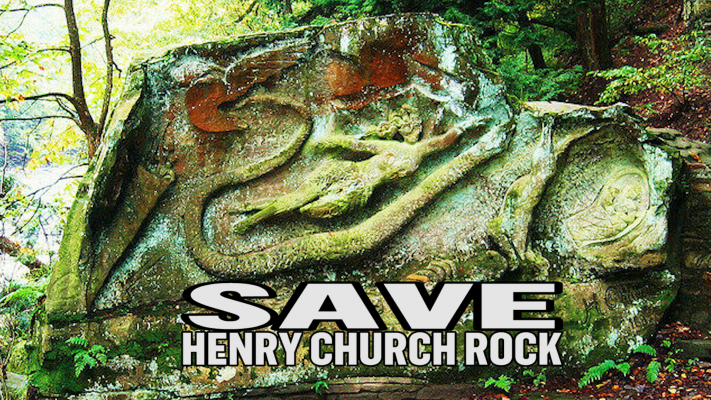 Please sign this petition to SAVE Henry Church Rock. PLEASE DO NOT DONATE NOW. This massive and magnificent sculpture, on the banks of the Chagrin River in Ohio, has deteriorated to a point where action must be taken NOW, so this work of art isn’t lost forever. Henry Church, Jr. carved the sculpture in 1885, on land now owned by Cleveland Metroparks. Henry was a self-taught artist who became one of the great folk artists in American history. His works, in various media, are featured in museums and private collections around the country.

Once called Squaw Rock, and now Henry Church Rock, it was a visual way of portraying his anger at the way Native Americans had been treated. More than 135 years later, it has become an iconic piece of culture and an acclaimed work of art. Moss, lichen and weeds have overtaken the sculpture due to a lack of maintenance by Cleveland Metroparks.

A simple cleaning of the Rock and trimming of plants that prevent sunlight from reaching the Rock is all that is currently needed. We need Metroparks to allow these basic actions. They know we will cover the cost by raising funds and that labor will be provided by professional conservators we will pay. Your signature, along with others, will show Cleveland MetroParks the growing support for the urgent need to SAVE Henry Church Rock.