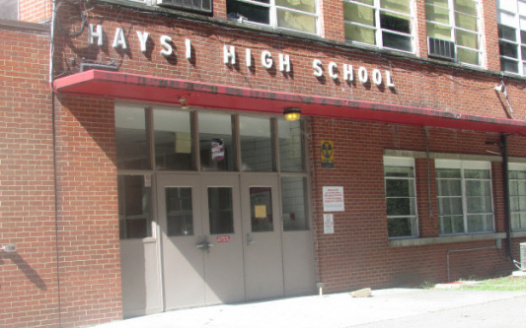 They want to tear down our school, we all have so many memories here. this isn't just a school this is our landmark, our lives. Instead of tearing it down why not make it into something useful like, a museum or the glory years of haysi high from when it was built to when it shout down.. Below is some history of our school:

Haysi won the state championship for boys basketball in 1962.[1] The boys team was awarded the Marshall Johnson Sportsmanship Award for the 1997-1998 season. The Haysi girls team held the Virginia State Record for most consecutive wins with 78 from 1947 to 1951, which is now held my Millbrook High School, Winchester, VA, with 79 consecutive wins.

Haysi won 19 Black Diamond District titles and claimed 3 Region D Titles, and 5 total State Semifinals appearances. The Tigers football teams was led by James Colley, who returned to his alma mater in 1979 and took over as Head Coach in 1981. As Head Coach he won over 200 games, led the Tigers to the playoffs in 22 seasons and is known throughout Southwest Virginia as an offensive mastermind, utilizing multiple formations. This offensive style has resulted in several former Haysi players being included in the VHSL record book; Jason Compton(87 Career Passing TDs), Terry Gulley (7 Passing TDs in a single game), Kory Bostic (38 Career Receiving TDs), Dakota Stanley(17 Receptions in a single game, 304 receiving yards in a single game, 165 Career Receptions) and Allen Owens (174 Career Extra Points). All are in the top 10 in their given category. While the Haysi Football team enjoyed considerable success that was not always the case, between 1964 and 1969 the Football team lost 43 consecutive games.

Track Haysi has also dominated the Black Diamond District in Track, winning nearly all of the competitions.