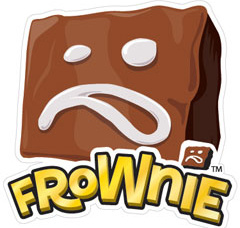 I recently went to a King's Family Restaurant and encountered a huge problem! It wasn’t the service or the atmosphere but what was missing, THE FROWNIE. I stopped there so my husband could get an "Angry Mob" which is/was a massive icecream sundae covered with Frownie Brownies and my son wanted to buy his girlfriend a Frownie T-Shirt like her grandma had when she was a little girl, but no. That was not possible because the new owners decided to do away with the Frownie Brownie.

I know with new owners come changes but all the Manager could do was parrot some corporate slogan about making a King's a "Real Pittsburg Restaurant" in spite of the fact we were not in Pittsburgh but Bentleyville, PA and the restaurant I usually frequent is in Wintersville Ohio. He did not even offer contact information and acted as if it was done deal. How can it be when so many others must love the Frownie too and we are not even from the midwest!

I can only hope that in revamping what was already a fantastic diner that the new owners listen to THEIR customers and SAVE FROWNIE!

Come on Pittsburgh and all you other lovers of the Frownie, let's make our voices heard!